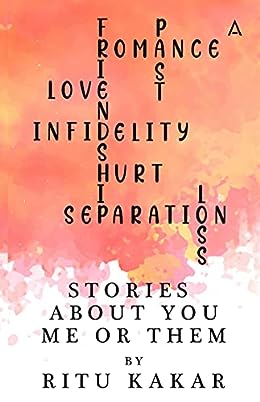 The Stories about You, Me or Them by Ritu Kakar is about emotions that people confront or deal with, on a daily basis. It’s a collection of ten different stories dealing with friendship, love, loss, separation, connections, mother-child relationships, etc. The book was published in 2021 by Ajitabha Publishers.

This novel portrays a wife’s effort to keep her family secure, a friendship that grew stronger over the years, a mother wanting the best life for her child, long lost love, and many more but, every story could be linked with someone out there.

Perhaps it was fate because from then on, they had been inseparable. They dated for three years despite her parents’ objections, and the day he bought his first house, they got married, again against her parents’ wishes. They attended the wedding and even blessed them but were never happy about it. They always felt their daughter deserved better and more. They were eventually proved correct. One careless mistake of his had ruined everything.

Finally, though reluctantly, he starts accepting reality. He decides to talk to Sasha and begin planning a future, their future. With his renewed mindset and the remnants of both their broken hearts, he drives towards the beginning of an unknown future with the hope that he can leave the past, his memories, his love, his desires and his Purvi behind.

Book Review: Stories about You, Me or Them by Ritu Kakar 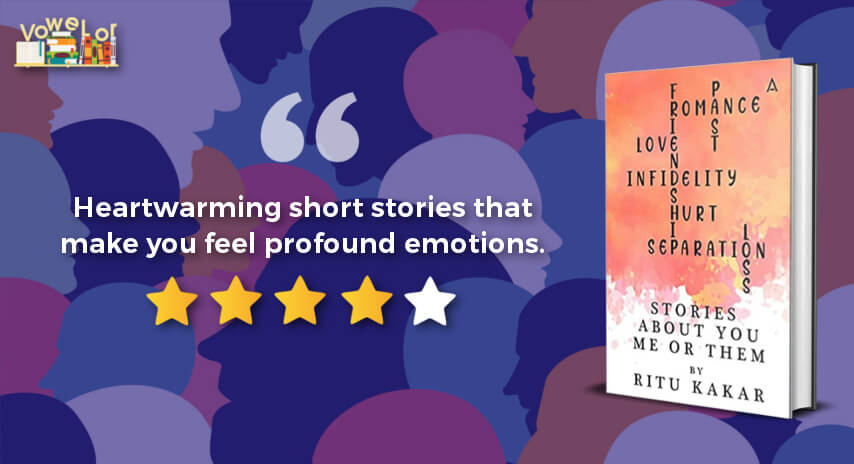 The stories in this book take you through ten different emotions with ten different titles. Each story has its own essence and you’ll feel it vividly while reading.

The very first story, Smile away the tears, is about a wife, Rami, who finds out that her husband was cheating on her. When she tries to confront him about the situation, all she receives is the blame for checking his phone. She feels shattered, broken, her trust gets crushed. All she could think about was that she was still sitting in her husband’s house, but not hers. She gave up her dreams, and her own family warned her about the person, but she never believed. Rami chose to remain silent for her daughter Riya and her future.

The second story, Maa.. knows best, tells the story about a son, Raj, who had lost his mother. He was close to her, he found joy in having dinner with her, spending time with her. He was in college when he fell in love with Mansi. Raj’s late mother did not like Mansi much because of her child-like behavior and being clever at the same time. She knew Mansi would marry Raj because of the family’s wealth and lifestyle. He tried to mold himself into Mansi’s lifestyle but was artificial, he was constantly pretending. The situation went worse when Mansi started nagging about things every time and Raj’s piled-up anger bursts out.

The third narrative is a beautiful story with the sweetest happy ending. Ishrat, a simple girl, residing in London for 6 years, was in love with a boy named Adhvait, who betrayed her, broke her trust. She was shattered all this while that’s when she meets Ekansh after 6 years. She knew Ekansh for a long time and he had seen her breaking down for Adhvait many times. She left Ekansh at the airport, the day she saw Adhvait getting engaged without even letting her know about it. But, 6 years later, after asking for Ishrat all over London. He expressed his feelings for Ishrat and wanted her to give herself a chance to fall in love again. The boy finally found her long-lost love.

From the fourth story in the book, people can easily connect to something they face. It’s about a husband who had taken his wife for granted all these years and now that she is gone he regrets his deeds. Mr. Gill’s wife Sukhmani, was an incredible woman. She never changed her simple lifestyle in spite of Mr. Gill earned so much more than he used to. She even taught their children the same. Mr. Gill used to yell at Sukhmani for not changing her way of living but all she did was smile. But, one day, Sukhmani’s outburst on an argument with Mr. Gill gave an impact on his life. And, after his wife’s demise, he realized his fault but it’s already late to rectify.

The fifth story from Stories of Me, You or Them revolves around a divorced couple, Purvi and Nishant. Just one wrong step by Nishant turns the entire relationship into a mess. The couple had been married for a long time but Purvi’s parents never approved of the relationship. Nishant found himself in a confusing situation; he was not able to go back to the love of his life, but he just got one single chance to reform the mistake he made.

The sixth story is about an impaired writer, Tamanna, who was introduced in a national television interview for her upcoming book. Sunhil, a friend of Tamanna, also the host of the show, interviewed her. While she was questioned by the audience and Sunhil, he asked her views on relationships. It was a good chance for Sunhil to confess his feelings for Tamanna that he kept inside him for several years. He finally gathered his guts to speak his heart out to Tamanna on national television using sign language that he learned for her six years ago.

In the seventh story, a woman saw her dream man after 26 years of a toxic marriage. Payal Shah was married to a selfish, womanizing baboon, who did not care for her feelings. Sahil was introduced to Payal by her friend Prachi. He was her favorite writer, she got so excited and could not take her eyes off him. She blabbered in excitement when Amit, Payal’s husband, stopped her for shouting. Sahil speaks in her defense. Later, that night Payal’s phone vibrated with a message, she skipped a beat with the name flashing and more than that, after reading the message he sent.

The eighth story reads about a man, Mihir, whose deeds from the past rise again in a powerful manner leaving him regretting the mess he had made in the past. Mihir and his wife Ishika, had been working in the same office for the past ten years but never had the chance to meet the CEO of the company. And, this time, the news was different, she was coming to Delhi to meet all the employees from her company.

She had been keeping her identity hidden all this while, not even revealing her name. Everyone called her ‘Ms. S’. The day arrived and Mihir could not believe his eyes, the CEO was none other than his ex-wife Ms. Sanobar Shah, whom he left helpless because she was not able to give her a baby. As the event started, Sanobar introduced herself. She mentioned the reason to start this business, it left Mihir put his head down in shame.

Sanobar also introduced her two adopted daughters who would carry on this company in the future. Mihir wanted to apologize for his sin, but the place for the past is in the past.

The ninth story brings back the lost love, ten years later. As Aroohi, welcomes the guest to her resort. A known voice was heard from the back, Mehak, her best friend, whom she lost contact with after the tragedy that happened in Aroohi’s engagement. Mehak was here at her resort to celebrate her anniversary with a few of her friends.

After a while, Aroohi hears a voice, and all the past memories came rushing into her head. It was Sanhit, her ex-fiance, the love of her life. She was in complete shock for the time being. She gathered herself and stepped back to her work when Sanhit stopped her and wanted to talk. It has been almost ten years since she had a talk with him. But, a moment and a look of Sanhit melted her heart and felt like giving her a chance again.

The last story, Royal Salute, is about a friendship that is rare to find and Mehak was the witness of it. Her husband was about to meet his school friends after thirty years. She made all the arrangements from the food to the drinks, everything. When they arrived the enthusiasm and spark between them could melt the heart of anybody standing there.

Even after being busy with their own life, they were able to take some time out for each other. They could recall the old memories from school, it was a feeling like they are living their childhood again. The laughter and the bonding were still fresh. Mehak could literally visualize the scenes going on in front of her. She couldn’t stop smiling seeing her husband’s childish behavior and the energy towards his friends.

✅ Get your copy of Stories About You, Me or Them by Ritu Kakar on Amazon now!

The author described each story perfectly so that one could relate to the characters and visualize them. The short stories are presented with a genius blend of emotions.

Talking about the author’s writing style, Ritu uses simple as well as sophisticated words to explain the language and the emotions that she had tried to portray could be felt down the nerves of the reader.

Emotions are not gender-biased and the author made that very clear in every story. Anger, love, affection, care towards one partner is for all; be it an ex-wife, old friends, late mother, or any relationship.

About the Author: Ritu Kakar

Ritu Kakar is the author of 4 top-rated books. Being a housewife, a mother of two kids, and a college dropout, Ritu herself is an inspiring example for women who desire to achieve more in their lives.

She got married at an early age and could not finish her graduation. But, with the support of her husband, parents, and in-laws, she pursued her passion for writing.

Her first book ‘One Precious Moment’ was published in 2018 which was a pleasant surprise to the family. Her second book ‘Love Unexpected‘ reached the top charts on Amazon and she never looked back for there!

Read the exclusive interview of Ritu Kakar with Vowelor to learn more about her life, works, and future plans.