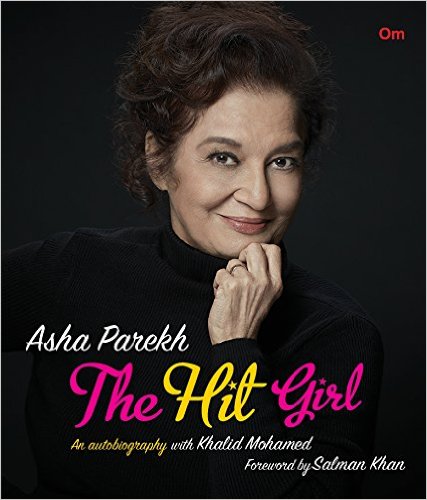 The Hit Girl is the biography of Asha Parekh, the veteran Bollywood actress which she has written with Khalid Mohamed. Also, the Bollywood Superstar, Salman Khan, has contributed to this book by writing the foreword. Being Asha Parekh’s biography, The Hit Girl is a bare-it-all memoir that relishes the journey of Asha from a child actor to the diva of 60s and 70s and her unmatched contribution to Hindi film industry. The Hit Girl by Asha Parekh is released on 10 Apr 2017.

The 75-year-old actress, Asha Parekh, has divulged all about his life for her fans. The senior journalist and film critic, Khaled Mohamed has taken care of the writing part of the book. With the help of her biography, The Hit Girl, Asha Parekh shares a lot from her life including her childhood days at acting, learning classical dance after school hours, her first break as a leading lady in Bollywood and her quintessential success all through the 60s and early 70s. Padam Shri Awardee and winner of multiple awards of the Film industry, Asha Parekh was last seen in ‘Sar Ankhon Par’ in 1999.

The Hit Girl also provides insights on her personal life, her relationship with the Film director, Nasir Hussain, and why she never married to anyone. Asha Parekh is counted among the most successful actresses of all time and The Hit Girl celebrates the same. After she retired from acting, Asha Parekh never detached herself from the Film industry. She took up important positions including the head of Censor Board and worked for the welfare of the technicians and the staff of industry.

Among all the things that the readers will find in The Hit Girl by Asha Parekh, there is one most important thing that the book highlights is Asha Parekh’s inspirational journey that she covered on her own. It is applaudable for a woman from that era to live life on her own terms and choices. In that light, Asha Parekh’s biography, The Hit Girl, is something from which every girl of today could take inspiration.

The Hit Girl is Asha Parekh herself presented in between the pages of the book and will make the elder ones feel nostalgic and the younger ones inspired by her life.

Asha Parekh’s biography, The Hit Girl, is something a fan cannot miss!

Born in 1942, Asha Parekh is one of the most celebrated heroines of all time. She started working in Hindi films as a child artist but her debut film as a lead actress was Dil Deke Dekho opposite Shammi Kapoor. During the period of 1959 to 1973, Asha Parekh gave numerous silver and golden jubilee films and became the most successful actress of the era winning many awards. In 1992, She was also awarded Padam Shri from the Government of India.

Khalid Mohamed is a senior journalist, film critic, editor and screenwriter. Khalid has worked for Hindustan Times and has been a top editor at the Filmfare Magazine. He has written has written the biography of Superstar Amitabh Bachchan. His latest book is The Hit Girl, a biography of Asha Parekh.