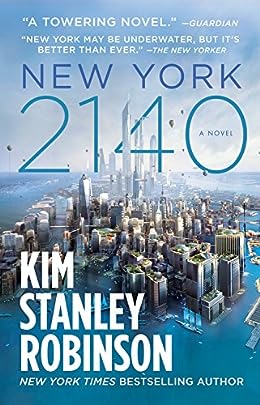 Now, his latest novel, New York 2140 which is a part of Science in the Capital series, is released in March 2017.

The story is about varied residents of the Met Life skyscraper on Madison Square. There are many different characters in this 624 pages novel, New York 2140, ranging from a market trader, a detective, an online sensation, programmers and even kids.

Kim Stanley Robinson has tactfully weaved this intriguing in-to-the-future story with extreme details that make everything feel so real. There are a number of plots going together in the New York 2140 by Kim Stanley Robinson including kidnap, politics (small and large), Wall Street, police investigation, polar adventures and even a treasure hunt for buried gold.

With the underlying theme of climate change, New York 2140, Kim Stanley’s has successfully shown how a human civilization could get thrown into the mouth of death. New York 2140 by Kim Stanley is a towering and challenging read not because of it’s length but because it makes the reader not to lose focus even for a moment.

Towering and challenging read. Makes the reader not to lose focus even for a moment.

About the Author: Kim Stanley Robinson

Born in 1952, Kim Stanley Robinson is an American author and NY Times bestselling author of science fiction. He earned a Ph.D. in Literature from the University of California, San Diego.

Kim Stanley Robinson is the author of more than twenty books, including the bestselling Mars trilogy and the critically acclaimed Forty Signs of Rain, The Years of Rice and Salt and 2312.

He has won the winner of the Hugo, Nebula, and Locus awards. Robinson married Lisa Howland Nowell, an environmental chemist. And, many of his novels are about nature and the future.