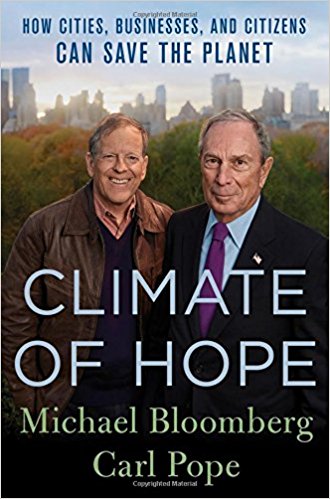 Michael Bloomberg’s Climate of Hope is aimed to provide solutions can help fight the changing climate and save mankind. Being a businessman, philanthropist and an environmentalist, the former Mayor of New York, Michael Bloomberg joined hands with Carl Pope, who is a lifelong environmental leader, to come up with this interesting and innovative book, Climate of Hope. Talking about new solutions with contribution of Businesses and Citizens, Climate of Hope is a new-age guide to towards tackling Climate change.

In this book, Climate of Hope, Michael Bloomberg and Carl Pope study their different approaches towards tackling environmental changes yet they ended up with same conclusions. With a few contradictions, both the geniuses conclude that fight against Climate change can be won with cities, businesses, citizens coming together no matter what the political decisions are being taken in Washington.

The Climate of Hope by Michael Bloomberg and Carl Pope turn the usual way of thinking about climate change on its head: from top down to bottom up, from partisan to pragmatic, from costs to benefits, from tomorrow to today, and from fear to hope.

A sustainable blueprint for fighting against Urban Climate Change. Must Read.

Michael Bloomberg is the American Businessmen, Author, Philanthropist and the founder of Bloomberg LP. He is also the former Mayor of New York City. He was named as the 8th Richest person in America and 10th in the world as of March 2017. Michael’s charitable foundation, Bloomberg’s Philanthropies works in the crucial areas like public health, environment and govt innovation. He has also worked at various positions in International agencies for climate change including United Nations.

Carl Pope is a well know environmental leader who has devoted his life for fighting climate changes. He was also the Climate advisor to the former NY Mayor, Michael Bloomberg.  He is currently a member of the US-India Track II Climate Diplomacy project of the Aspen Institute. Also, he is a regular contributor to Bloomberg View and Huffington Post. Mr. Pope is also the author of three books too.