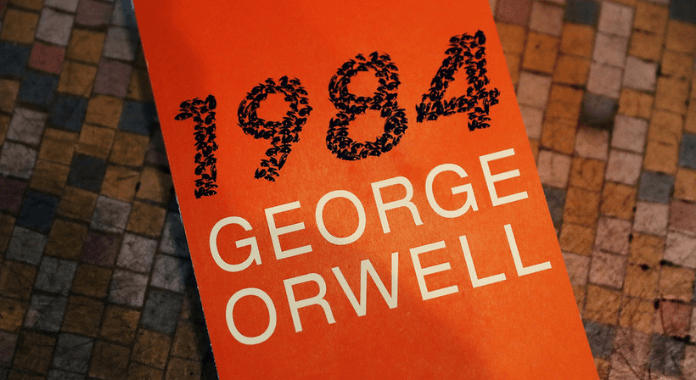 Since you have already read 1984 by George Orwell, I am sure you are searching for more books like 1984.

You might have come across of book suggestions like – Handmaid’s Tale, Fahrenheit 451, Lord of Flies and many more as the books similar to 1984.

But we will not talk about these famous books!

Here I will recommend you books which are less known of but are the most related books to 1984 and perfect for all George Orwell fans.

These are the top recommendations for books similar to 1984.

1. We by Yevgeny Zamyatin

I heard about We by one of my friends while I was reading George Orwell’s 1984. We were on our challenge of reading classic books as much as possible in a year and then we ran into this amazing novel like 1984.

We by Yevgeny Zamyatin was originally published in 1924 and was the first book banned by Soviets. It is a story of citizens of One State.

This Urban Glass City was governed by spies and secret police. People living in one state used to wear the same clothes and had no names. They were identified only by the number which was allotted to them at the time of their birth.

D-503 is a man who turned to be a rebel after meeting a woman I-330. They both secretly plans to destroy and liberate the city from these norms.

Even before 1984 or any other famous dystopian book, there was Brave New World published in 1932. This book had the same elements as in 1984 and hence, made its position in the list of books similar to 1984.

The book of utopian lands is about the technologically-advanced world. In this world, people are genetically bred, intelligence-based caste system, and psychological manipulation. This scientifically developed society is challenged by an outsider fighting for freedom and humanity.

I agree that this book is written over 80 years ago but it feels like it could have written yesterday only. You are going to enjoy every bit of this story.

I was compelled to read Vox by Christina Dalcher because of its intriguing title. And, now I can say that this book is one of the perfect books after reading books like 1984.

Vox is set in the near future where women are not allowed to speak more than a hundred words in a day. They were not offered jobs and girls were not allowed to read and write. Soon there was no voice of women.

This struck hard on Dr. Jean McClellan and she decides to fight against for herself, her daughter and for all the suppressed female voices of America.

I bet this electrifying novel will make you shiver on its every page.

4. The Dispossessed by Ursula K. LeGuin

Moving on with the list of books like 1984, the next one is The Dispossessed by Ursula K. LeGuin.

The Dispossessed is a tale of two planets Urras and Anarres. They have separated centuries ago because of distrust in the two worlds. When a physicist named Shevek decides to reunite the planets, he tries every possible effort to find out the reasons behind their hatred.

I thought I might not like this book but this riveting story has proved me wrong and I am happy to be wrong.

How one cannot read Never Let me Go after reading 1984? This novel is one of the most acclaimed novels of the 21st century. And, trust me, you are going to love it!

The story is narrated by Kathy who is a young woman now and recalls her childhood days. She thinks about the days in Hailsham which did not allow kids to have any contact with the worlds. She and her two other friends, Ruth and Tommy left the school and realized how different Hailsham was.

It is a love story full of mystery and plotted with the essence of the dystopian genre. I am sure like me you will also regret not reading it earlier.

6. The Sheep Look Up by John Brunner

I read this book on the recommendation of Amazon and sincerely thank them for suggesting to me when I was searching for other books like 1984.

The Sheep Look Up chronicles the story of the times when pollution is at the worst stage that everyone person has to wear masks. The environmentalist Austin Train runs away from his followers who want him to be their leader. But Austin just wants to live and denies offers from government, media, and his followers.

This book is one of the exceptional work in the dystopian literature and it’s worth to read this gripping classic.

And, here ends the list of books similar to 1984 with Anthem by Ayn Rand.

Anthem was originally published in 1938. It describes a strange world where any kind of individualism is not allowed. In fact, using the “I” word is also forbidden. The story twists when a young man, Equality 7-2521 meets a young woman, Liberty 5-3000 and they both together fights for freedom.

This dystopian and philosophical book is a treat to read and still feels relevant even after the ages of its publication.

Your Choice – Pick Books you find more related to 1984

Here I end the recommendations for the books to read after reading the classic novel, 1984. Let’s spread the word about these not-so-famous books which have a groundbreaking story in the dystopian genre.

I am still reading more of books like 1984 and soon will update you with other novels. Right now, I am reading Neuromancer by William Gibson. So far I am having a great time reading it, let’s see how it ends.