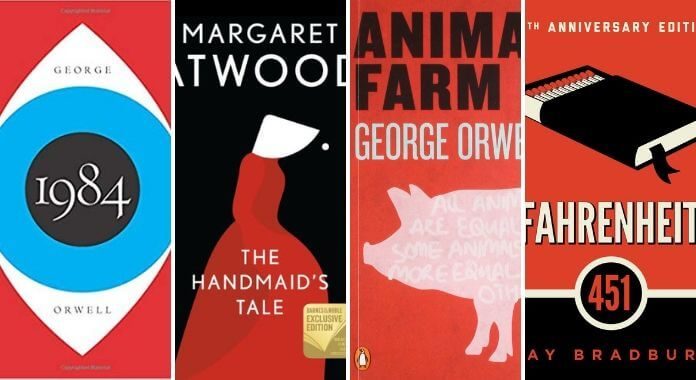 Reading a good dystopian novel can give you an all-new perspective on the real world around you; be it the society or the politics or an alternate way of life.

The dystopian books such as 1984 by George Orwell, The Handmaid’s Tale by Margaret Atwood are the truest mirrors of the society and bygone eras for the readers.

If you also enjoy reading extremely relevant stories that might introduce you to a completely different yet believable world, you need to get your hands on some of the best dystopian novels that I have handpicked for you.

Get ready to dive into the dystopian literature!

Published more than 50 years ago, 1984 is George Orwell’s last novel but surely not the least!

In this novel, the author imagines a totalitarian society where the “Big Brother” is always keeping a secret eye on every individual through telescreens even in their own homes.

Everything is censored and controlled in this dystopian world with no freedom at all.

The protagonist, Winston, decides to disobey all the boundaries and live a secret scandalous life. Obviously, he gets caught and tortured.

George Orwell’s way of writing will get you hooked from page one and keep you gripped until the last. That’s why it tops my list of best dystopian novels.

In fact, if you haven’t read 1984 yet, let me tell you Orwell predicted a lot of technologies in this book which are now a reality. And that’s one more reason the youth of this generation is still able to relate to it.

No surprise, the sales of 1984 by George Orwell increased in the past two years.

2. The Handmaid’s Tale by Margaret Atwood

Set in the Republic of Gilead, The Handmaid’s Tale takes you to a dystopian world particularly focused on the limited lives of women and how they are diminished to just singular roles.

Offred, the handmaid, narrates a disturbing tale of Gilead’s women who are labeled according to their duties; handmaid’s being the ones who are solely for the purpose of reproducing.

The disturbing details she gives about their lives are the mirror to the current society and women are treated in actual day-to-day lives.

The best kind of dystopian fiction is the one which convinces the reader that this world could actually exist. And, The Handmaid’s Tale does exactly that!

You may find this dystopian world build a bit slow. But, gradually the author grabs you into it where you’ll feel that oppression and injustice with every word you read. And that’s why it is one of my favorite dystopian books I read in 2018!

The next one is among the most popular classics – Fahrenheit 451. Ray Bradbury takes you to a dystopian American society where books are banned and reading is a crime! (imagine that happening in real life).

The protagonist, Guy Montag, is a fireman whose duty is to burn any book that he finds. But, eventually, he gets disillusioned with his job when a 17-year-old asks him if he had read any of the books he burns.

This turns him into a new person and he commits himself to preserve the books and cultural writings.

The world that Ray Bradbury builds in Fahrenheit 451 is scary at times but completely relatable to today when TVs (and the internet) has taken over our lives.

As a book lover, I would say this one of those books you must read before you die, literally!

A friend literally begged me to read The Hunger Games trilogy when I was looking for some good YA dystopian novels. Obviously, I could not deny, given the popularity of the series.

So, the book is set in a fictional country, Panem, situated in North America ruled by a totalitarian government at the Capitol.

The 12 divided societies burdened with the duties of supplying essential things like coal, food, forces etc. and the people being treated ruthlessly, creates a harsh dystopia.

‘Hunger Games’ are held each year where one male and one female from each zone would be selected and all of them compete against each other for their survival. The last one to remain alive wins.

For me, it was Katniss’s journey from being picked up for Hunger Games to the one who rises up and challenges the Capitol! That really buzzed me.

Honestly, I found the first two books of the trilogy – The Hunger Games and Catching Fire – better than the last one Mockingjay! Still, on my recommendation, you must read it.

I picked up this dystopian novel to put it in perspective with 1984. And, in my opinion, both are equally intriguing!

Even though Brave New World was written 1931, Aldus succeeds in creating a futuristic world with genetically modified beings, hallucinogenic drugs, test-tube babies, virtual sex and what not!

All this to create a perfect society where everyone is happy and having a calm life.

The character of Bernard gives you a constant feeling that something is not right. However, John the Savage opens up a hellish perspective towards what’s happening which the people of the society find normal.

It shocking and eye-opening that Aldus Huxley imagined such a world in 1931 and today’s society is actually moving towards it slowly. Read the book and you’ll agree!

Another one from George Orwell and I would label this as a dystopian novel for adults. If you are 25 years or above, you cannot miss reading this!

Animal Farm is essentially a great satire cleverly wrapped in a fable. Who would think that a story of pigs, horses and other animals could actually open your eyes towards the society you live in?

In a nutshell, it is set in a farm where the animals decide to revolt against the evil farmer and start running the farm by themselves. But with the new power, things don’t go the way they should have been.

Orwell wrote this book as a satire on Stalinist Russia. But, in my opinion, Animal Farm focuses on the fact that one must not listen to other people when it comes to their own rights.

And that stands true, no matter which country or political setting you belong to.

7. The Children of Men

This one is very different from the rest of the books I have mentioned.

The author takes you to the United Kingdom of 2021 (remember the book was written in 1992).

All men have become infertile and no human babies are born since 1995. The entire human race is set for extinction if things aren’t fixed well in time.

The country is ruled by Xan who has demolished democracy.

People are forced to learn animal husbandry as a necessary skill to stay alive. Women have to treat their pets as their children, dressing them as babies and pushing them in prams.

The suspense begins when Theo, a professor, former advisor and cousin to the ruler, is contacted by a group of women (the Five Fishes) in order to make Xan understand and accept their demands before humanity is extinct totally.

So, guys, that’s all for now. I have to halt this list of best dystopian novels as I am currently reading a few other books (my TBR is looonnnggg, like yours!).

I promise I will get back to this list again and add a few more interesting dystopian books within a couple of weeks.

At this moment, if you’ll ask me, my recommendation as the best dystopian novel is ‘The Handmaid’s Tale’.

But, I am not sure if it will stay the same after I read, We, The Giver and The Divergent etc. Fingers Crossed!

If you want me to read any of your favorite dystopian books, just drop that in comments below. I’ll read and add it to this list.