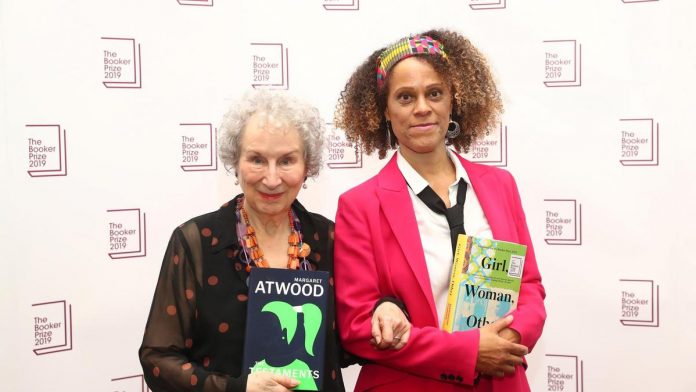 Attention all book lovers! We have the winners of the Man Booker Prize 2019 announced on 14th Oct in London. The Testaments and Girl, Woman, Other won 2019 Booker prize for being the best original novel written in the English language.

Here is the official announcement of the winners…

79-year-old, Margaret Atwood the author of The Testaments is the second time winner and third time shortlisted author for the Booker Prize.

And, the fact is, Atwood is the fourth author to win the prize twice. She is also the oldest award recipient in the history of the Booker Prize.

Not only this, in the early 1990s the rules were made to forbid sharing the prize. But, this time an exception was made and the author of Girl, Woman, Other, Bernardine Evaristo won the prize along with Margaret Atwood.

So, this was the third time after 1974 and 1992 that prize was shared between two authors.

It is interesting to know that Evaristo, an Anglo-Nigerian writer has made history by being the first black woman to win the prize since the inception of the Booker Prize.

This year’s jury of the prestigious award had shortlisted 6 books and the winners of the Booker Prize 2019 have been chosen from the six shortlisted authors.

The winners of the Man Booker Prize are awarded the prize money of £50,000 which is to be shared equally between the winning authors.

The Booker Prize 2019 shortlist was announced on Sep 3rd. And, here are all shortlisted books.

So, here is the list of the booker prize 2019 shortlisted authors and their books.

This year’s Booker Prize shortlist not only include famous writers but also the debutants with year’s best fiction work in English.

These books are shortlisted from the following Longlist of Booker Prize 2019 which was released in July.

Earlier the award was given in every two years. But, since 2016, it has been given annually to the books written in English or at least translated in English. It is given only to the living authors who have continued creativity and contributed to the fiction on the global level.

Talking about the shortlisted author, Margaret Atwood and Salman Rushdie are the repeated entries for the Booker Prize 2019 with their yet-to-be-published novels.

Salman Rushdie has once won the prize in 1981 for Midnight’s Children which is also considered as one of the best magical realism books of all time.

Whereas, Margaret Atwood has won the prize in 2000 for her book, The Blind Assasin. Also, she has been shortlisted earlier for her much-acclaimed book The Handmaid’s Tale in 1986 and again in the years 1989, 1996 and 2003.

Lucy Ellman, the author of Ducks, Newburyport is the only US author shortlist for the Booker Prize. The jury has defined this 998 pages book as a genre-defying novel, an outburst on modern life and a hymn to loss and grief.

Another shortlisted book of the International Booker Prize is Girl, Woman, Other by Bernardine Evaristo. This book is described as the “fusion fiction”. It talks about the lives of 12 people mostly, black, British, and female in her popular multi-narration and poetic style.

From the last four years, there was no writer from Africa listed for the Booker Prize which was formerly known as Man Booker Prize. But this time, Chigozie Obioma made his place in the shortlist of the Booker Prize with his book, An Orchestra of Minorities.

The sixth one in the Booker Prize shortlist is 10 Minutes 38 Seconds in This Strange World by Elif Shafak.

Elif Shafak has already published 17 books out of which 11 are fictional novels. The book is considered as the groundbreaking imagination narrating the story of Istanbul sex worker who was left in a rubbish bin after a fatal accident.

With all these amazing books shortlisted in the Booker Prize 2019, I am all set to read each and every book of the list. (that’s how I am supporting the awards… by treating myself! :P)

Now especially the winning books will be my priority.

Let me say it! I am solely rooting for The Testament by Margaret Atwood as it is the sequel of my favorite book The Handmaid’s Tale. It eventually won the award.

Also, the jury has given us, the readers a bonus by announcing the second winner, Bernardine Evaristo of the Booker Prize.