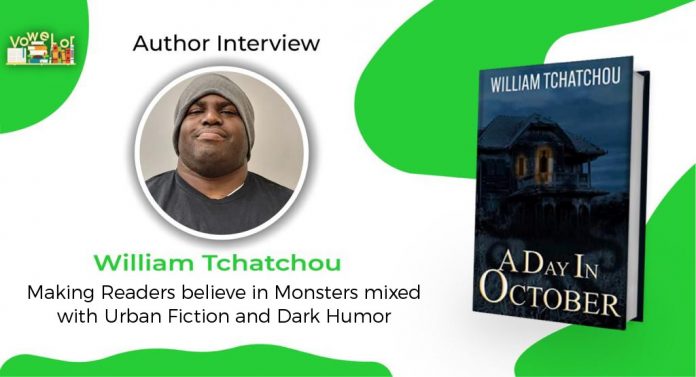 Making the readers actually believe in monsters in urban fiction take extraordinary writing skills. And, a very few authors can do that magic. We’re happy to introduce one such author, William Tchatchou, who keep the readers hooked into the horror fantasy world he creates.

William has recently released ‘A Day in October’, the second book in ‘The Boy King’ series. The first book ‘Hotel of Madness’ was published in earlier in 2021.

At Vowelor, we got a chance to have an exclusive conversation with William Tchatchou. But, before we continue with her interview, let us know a little more about the author.

About the Author: William Tchatchou

William Tchatchou is the author of ‘The Boy King’ book series. In 2021, William published his debut book ‘Hotel of Madness’ which is the first of the series. The next book of the series ‘A Day in October’ was released later the same year.

Born in DC and raised in P.G. County, Maryland, his first book features a lot from the place. Apart from the book, he also writes a variety of short stories.

William Tchatchou grew up reading history books. He loves anime and stays active in nerd/geek community. When not writing, he treats his two loveable dogs more like his children.

His friends and family believe that he has an active imagination. They encouraged him to share with other people he started to agree with them.

Further, William shared about his writing journey, his inspirations, and more interesting things about himself. Here’s all of his answers.

K.A Applegate, when I was a kid her Animorphs series was my introduction into science fiction. Then you have classic writers like H.P Lovecraft, Robert E. Howard, and Robert Heinlein that carried the torch as a young adult, and Charles Stross for mixing cosmic horror and geek culture.

Besides write, play video games and go out with friends when available.

Can’t be that bad.

Get 8 hours of sleep.

I guess my new genre with good horror hard to find is the growing progression/litrpg genre. Will Wrights Cradle has been good and fast paced read.

I would like to play around with the Warhammer 40k license and make some stories in that universe. It’s a big science fiction universe with a lot of dark fantasy elements.

Mostly my friends encouraged me and last year I’ve been working on myself in therapy.

I am a rather chaotic person so I don’t really have “writing time”. I usually just try to write a chapter a week.

It’s one of the few things I’ve come to enjoy these last few years and I indeed of doing it for a while.

About Your Book: A Day in October 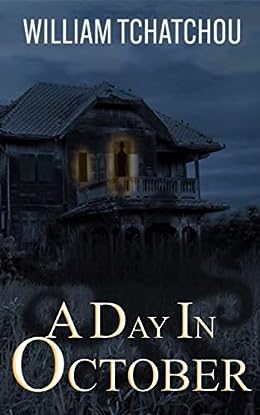 A Day in October is the second book by William Tchatchou in the The Boy King series. The story opens when an unusual incident happens in Missouri where a 10-feet tall creature engulfed 16 young people. No evidences, no dead bodies are left behind. The Police could not find anything and culprit was never found.

Something similar happens again and Arthur Curry, a monster hunter, goes on a quest for this deadly creature. He digs everything from case files to statements of witnesses. Soon, he finds a witness who is the only hope to solve the mystery.

Read A Day in October by William Tchatchou to find out if Arthur can uncover the real truth behind all the deaths.

Special Note from the Author

I am not going to spam you with social media links. But if you want to find out what I’m doing search my name on Amazon.com. Or you can find me on Facebook and Instagram just add “author” before you type out my full name.

A Day in October is a mix of horror, meets urban fantasy, set in a lovecraftian universe. All three of these genre’s are my favourite types of fiction and has inspired stories like Buffy the Vampire Slayer, Stephen King’s IT, and 1982 move The Thing.

How was the idea for the book originated?

I wanted to challenge myself and write a chapter of a story a day for a WordPress blog. I was also inspired by crime dramas, 1980’s horror movies, and took inspiration from D.C comic book super heroes.

What was the inspiration behind the Arthur’s character, especially his sarcasm?

Most people say he sounds like Harry from the Dresden files. Me personally I based his sarcasm off myself and I started to approach problems as someone working in IT. I wanted a character with the mythos of a super hero but is grounded in our reality.

What makes ‘A Day in October’ to stand out in this genre? What should a reader expect from it?

What makes A Day in October stand out is hopefully the sense of dark humour, the use of pop culture references, but most importantly the world where magic is necessary but also inherently evil in nature.

The story has monsters and occult phenomena, still it feels quite believable while reading. What was the hardest & the easiest thing to write a story like that?

I have to be honest, there are some ghost chapters I didn’t feel where good enough so I never added them to the story. Trust me you don’t want to read those.

Right now its really a matter of publishing while I’m still inspired. I have a second book on the way in the “Boy King Series” in which A Day in October is a short story. I have a few other genres I want to write in, mostly science fiction.

I have a few projects down the road, but if you read this book, I hope you read its direct sequel Hotel of Madness. From there expect a story where I ruin Christmas as the follow up to that story.

Personally, success is knowing that people enjoy what I write and it inspires them to write more stuff I’d like to read. This is really just a long con to get people to write more fiction I can consume.

What are your thoughts on self-publishing industry?

It can do better. A lot more effort can be made to connect authors to readers, especially of niche genres.

Write the book you want.