Well, to start with Harivansh Rai Bachchan poetry, here are the most popular poems written by the legend. These poems became so influential that they were also used in Hindi cinema at various occasions.

Madhushala was published in 1935 and it gave Harivansh Rai instant fame. Madhushala is written with the unmatched use of metaphors defining the way of living life in the most philosophical manner ever. The poem has 135 verses of four lines each ending in the word Madhushala. The poem was also sung by Harivansh Rai Bachchan’s son and the legendary actor, Amitabh Bachchan. Later on, the poet also wrote two more parts on the same theme – Madhubala, Madhukalash.

Here is the excerpt from the poem Madhushala. 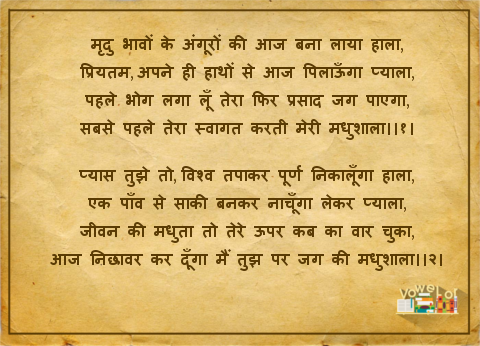 Another poem by Harivansh Rai Bachchan which became immensely famous was Agneepath. The poem gives a clear message that the life is a tough struggle at every step and those who resolve to strive are the ones who win! The poem is relatively small but it is equally deep and inspiring.

Here is the complete text of Agneepath by Harivansh Rai Bachchan. 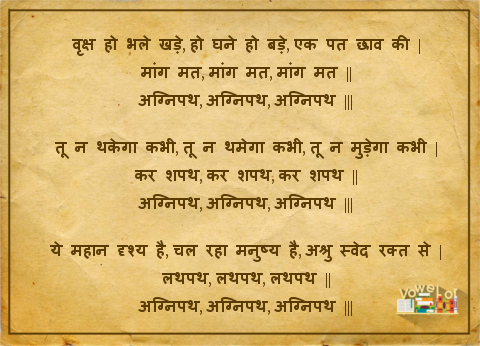 Harivansh Rai Bachchan’s poems were the true reflections of life and his philosophy about the same. Jo Beet Gayi So Bat Gayi is one such poem where the poet urges man to move on in life no matter what has happened. This poem uses mindful comparisons of human life issues to the phenomenon of nature and derives the message of let go and move on. 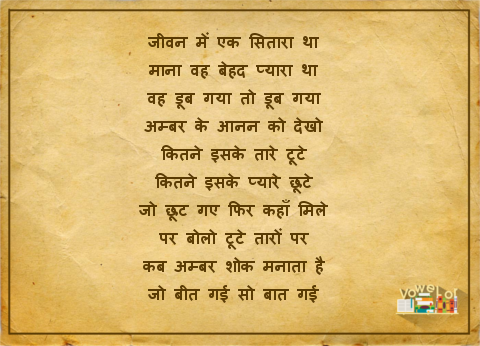 This is one more masterpiece poem written Harivansh Rai Bachchan. The poet has brilliantly explained the fact that those who dare would never loose; Trying is the sole key to winning. With this poem, Harivansh Rai teaches that your efforts would never go in vain so don’t stop, your work will give fruits ultimately.

Here is the excerpt from the poem Koshish Karne Walo ki by Harivansh Rai Bachchan. 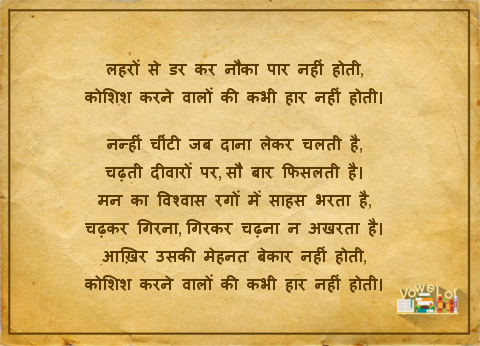 Ruke Na Tu is one of the incredible pieces from Harivansh Rai Bachchan Poems. This poem is very powerful and fills up the readers with confidence and attitude to never stop and never deviate from your path. Harivansh Rai has written this poem in a manner that is can easily be memorised. He has used simple yet powerful words to express all the positivity required to get up and start working!

Here is the complete text of the poem Ruke Na Tu by Harivansh Rai Bachchan. 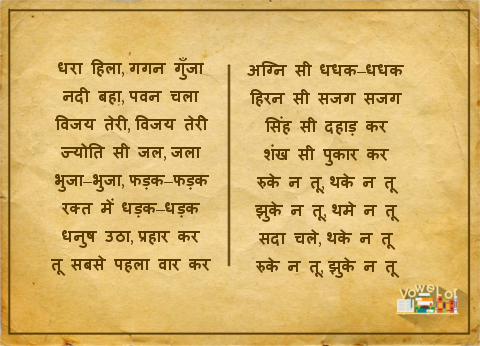 Did these poems inspire you? What are your thoughts about Harivansh Bachchan’s poems and his contribution to the  Hindi Literature? Let us know in comments below.

20 Best Poetry Books Of All Time For Your Poetic Soul

The Sun and Her Flowers : Rupi Kaur’s New Book Already a Bestseller

20 Best Poetry Books Of All Time For Your Poetic Soul

The Sun and Her Flowers : Rupi Kaur’s New Book Already...