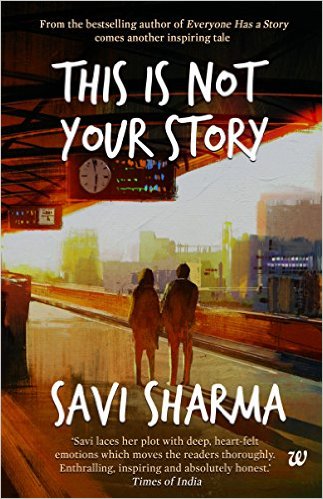 Book Review : This is Not Your Story by Savi Sharma

With her new novel, This Is Not Your Story, Savi Sharma is going to give a good start to 2017. This is Not Your Story by Savi Sharma is her second novel after the record-breaking success of her debut novel, Everyone has a Story. This new book of Savi Sharma is released on 14 Feb 2017 in which she tells a transforming tale of self-discovery, hope and courage.

Summary : This is Not Your Story by Savi Sharma

There are three main character of This is Not Your Story by Savi Sharma – Shaurya, Miraya & Anubhav – around whom the whole novel revolves.  The theme of the novel, This is Not Your Story, is how actually a person can write or moreover rewrite the story of their lives. Savi Sharma has tried to tell the readers how sheer courage and ceaseless hope can turn your life to the road of your dreams.

Shaurya is a CA student who is chasing his dreams of becoming a filmmaker and wants to enroll in a film making course in Mumbai. While Miraya, an interior designer, follows her dream but does not give up on love. And Anubhav, an ambitious boy who becomes an entrepreneur at an early age but life plays a brutal joke on him. No matter what he decides to give life a second chance.

Exclusive Preview of This Is Not Your Story – Read Online

About the Author : Savi Sharma

Savi Sharma was born in Surat, Gujarat in 1993.  She was studying to be a Chartered Accountant but left studies to become a Storyteller. In 2016, She self-published her inspirational novel, Everyone has a Story which made her India’s first successful female self-published author. Later, she signed with Westland Ltd to write more stories.

She is also co-founder of motivational media blog ‘Life & People’ where she writes about positivity, meditation, law of attraction, spirituality and other such topics. She loves observing people and often finds her stories while observing people at cafes. Savi also has a secret list of 100 wishes which she wants to fulfill in this one lifetime.

View All Books by Savi Sharma