While you are nuts about the release of The Winds of Winter, George R R Martin has announced a surprise for everyone. The Mystery Knight graphic novel which will be releasing on July 4, 2017. George R R Martin released the novel The Mystery Knight as the third book in the Dunk and Egg series in 2010. Now, the graphic version of this best-selling novella will be published by Penguin Random House next year.

“The long-awaited… and much requested… graphic novel of THE MYSTERY KNIGHT, the third of my Dunk & Egg novellas, is on its way at last.” 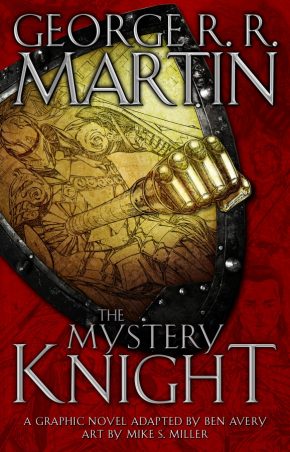 Intriguing cover! Isn’t it? (Let me know in comments). The story of this 2010 bestseller has been adapted to the graphic novel by Ben Avery and creatively illustrated by Mike Miller. This is the same team that recreated the magic of The Hedge Knight and The Sworn Sword. And even, Martin has appreciated their work saying “From what I’ve seen so far, it’s gorgeous!”

For those who have missed The Mystery Knight and even read it yet, the story is about Dunk and Egg getting into a wedding feast and an unreal as well as a lucrative tourney. And the trophy of the tournament is a dragon’s egg! Now, Dunk and Egg gets into the chaos which gets deepened as the dragon hatches.