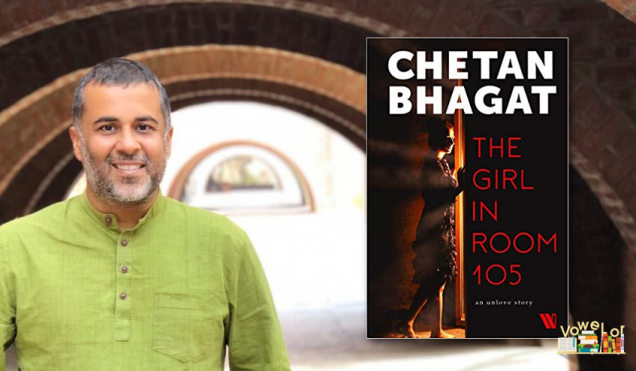 The most popular Indian Author who enjoys the fan following of more than 12 million on Twitter, Chetan Bhagat, is back after a gap of two years with a new book which is set to release in October 2018. The last book by the author was One Indian Girl (2016) and it topped the bestselling charts for a long time.

Recently, Chetan Bhagat has been teasing his fans with Guest the Title challenge on his social media. And finally, he went on to reveal the Title and Cover of his new book in a Facebook Live session on Sep 3rd. Did you miss it? Don’t worry, Just read on. We have got all the scoop for you and much more about the latest book – The Girl in Room 105 by Chetan Bhagat.

Check out our unbiased review of The Girl in Room 105 by Chetan Bhagat.

The Girl in Room 105 is Chetan Bhagat’s latest novel taking the count of all his books to 10. This time again, Chetan is bringing a love story and has taken yet another issue of our country – the Religion Bias – as the backdrop his novel.  In the same way, he has previously used the Education system in 5 Point Someone, State-based Bias in 2 States and Feminism in One Indian Girl.

This book, The Girl in Room 105, is the story of Keshav – a Hindu boy and Zara – a Muslim girl from Kashmir. Even having loved each other truly, they had to break up; their religion being the reason. While Zara moves on, Keshav who works as a teacher (which he hates) still wishes to be with her.

The plot comes to the point when Zara, after years, asks Keshav to meet in his hostel room 105 where they used to meet when they were in the relationship. And there begins a series of thrilling events which turn the love story into an “Unlove Story”.

Well, the story sounds pretty interesting and Chetan revealed some more details about his latest book in the FB live session. Check out the video below.

As you Chetan Bhagat has been accused of being writing books just to turn them into movies. And, ironically, Chetan has released a full movie-style book trailer for The Girl in Room 105. The book trailer features the talented actor Vikrant Massey as Keshav who narrates the synopsis of the book that literally sets the viewers on a journey right into the book.

Watch the book trailer of The Girl in Room 105 by Chetan Bhagat below.

And yeah! There’s a special offer running on Amazon. When you pre-order The Girl in Room 105, you get the collection of 7 bestselling ebooks by Chetan Bhagat worth Rs 399 for FREE. Isn’t that amazing? If you are a Chetan Bhagat fan, there won’t any better time to get all books written by Chetan Bhagat.

Are you excited about Chetan Bhagat’s new novel? What do you think about the book trailer? Share your views about The Girl in Room 105 by Chetan Bhagat in the comments section below!