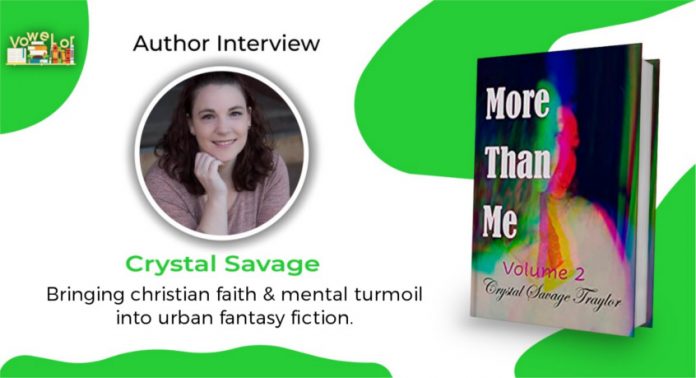 It isn’t an easy task to amalgamate fantasy into an urban setting while making sure that the balance between the two key aspects doesn’t get jeopardized. We’re happy to introduce one such author, Crystal Savage Traylor, who has taken it upon herself to master this intricate balance and give us some impeccably written urban fantasy fiction.

After the release of the second volume of her book, More Than Me; we, at Vowelor, had an interesting conversation with Crystal Savage about her writing. But, before we continue with her interview, let us know a little more about the author.

About the Author: Crystal Savage Traylor

Crystal Savage Traylor is an author and analyst from the small town of Tyler, Texas. She has recently published the second volume of her book, More Than Me. It is an urban fantasy novel with concepts like twin souls, soul transfer, Benson’s Syndrome, and whatnot.

Crystal was born in Seattle, Washington but moved to Texas with her family shortly after. She spent her childhood in the town of Lindale and has been in Tyler since then. She lives with her husband and three kids who are responsible for making her life pretty much a roller coaster ride. Apart from that, she majored in Marketing at the University of Texas, Tyler.

Further, Crystal shared about her childhood, her writing journey, her inspirations, and more interesting things about herself. Here are all of her interesting answers.

Tell us about your parents and family.

I had a somewhat unconventional childhood. My parents could fit in with the hippie crowd in their younger days. I have three siblings. I’m the third born of us four kids but my older brother and older sister are nine and seven years older than me, respectively so I felt a lot like the oldest child when it was only me and my younger brother at home.

My parents are both from southwest Louisiana, but our family moved around a lot (even living on the Colville Indian Reservation in Washington state briefly in the early 80s) before settling in Texas in the late 80s.

When and where were you born and brought up?

I was born in Seattle, Washington in April of 1983. I grew up in the small town of Lindale in East Texas and had almost free reign of nearly 20 acres of woods and creeks in my younger years.

I was very shy as a child and several of my classmates classified me as a nerd. My favorite subject was math, and in third grade, I entered the school’s academic pentathlon. My teacher encouraged me and allowed me time in the hallway with extra work to practice. When they were announcing the winners over the intercom, they started with 6th place, and with each name announced I grew more and more discouraged.

I was thinking that all that work was for nothing but then they announced my name as the 1st place winner. I was in total shock and the only thing that pulled me out of it was my teacher hugging me while jumping up and down in celebration.

What are your educational qualifications?

Even though I graduated high school as a junior in 2000, I waited until 2008 to start college. I graduated with honors in the fall of 2013 with my bachelor’s degree in Marketing from the University of Texas at Tyler.

There are three things of which I’m immensely proud: I’m a 1st generation college graduate. I’ve raised extremely independent children. And I’ve put the work in to create and see published some of my written works.

Suspense writer John Saul has a terrific way of showing you a character’s motivations and convincing you to side with them and then flipping it to have your side with their counterpart. And the character-building and world-building that horror writer Stephen King does I think are phenomenal.

I have multiple Sudoku games on my phone. I play while relaxing watching most any kind of true crime show.

Don’t let your shyness keep you from advocating for yourself.

I love thrillers, suspense, and horror books. My daughter and I were reading the House of Night (P.C. and Kristen Cast) series together. It’s a YA vampire fantasy novel series; we love that it’s a bit darker than Twilight.

Oh gosh, so many come to mind! I keep coming back to Stephen King’s Hearts in Atlantis. It’s one of my favorites and it’s so underrated. And the movie version did it no favors.

Stephen King says (I’m paraphrasing) he doesn’t carry a notebook for ideas; he says if you can’t remember it, then it’s no good.

I completely understand what he means by this because I’ve had several ideas for stories and they all can start so small. The ones you can’t stop thinking about; the ones that grow like kudzu vine…. those are the ones that make you write them. They grow into your favorite story (that no one has ever heard of) and you have no choice but to write it out just so you can share it with someone else.

I tend to get hyper-focused once I start writing, so I make sure I have the time. I have a full-time job and kids still at home, so I don’t have a ton of free time. Afternoons and evenings are best for me.

All of the above! One of the best feelings is being able to fangirl with someone else over something I’ve written. 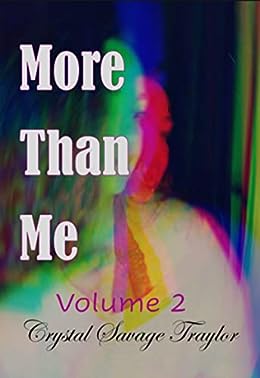 More Than Me (Vol. 2) is an urban fantasy novel that revolves around trauma, turmoil, and unreality in a way you could never fathom otherwise. The story has elements like shared memories, twin souls, recessive souls transferring to other bodies in certain circumstances, and the mental turmoil they go through afterward.

With all the fantasy elements, the characters sail through their course while figuring out themselves and their feelings, fears, dilemmas, and more.

More Than Me and More Than Me: Volume 2 are Christian fiction. Some might say science fiction. As a Christian, I need my faith to be solid no matter what is going on in my life.

So many times in fiction and especially science fiction, if someone encounters an impossible scenario the first thing to go out the window is their faith in God. These books show that it doesn’t have to be one or the other. Both can be true at the same time.

What was the inspiration behind writing this series?

My husband and I watched a ‘switching bodies’ movie and it just started with me asking what I would do in that situation. I definitely wouldn’t think it was funny. And my faith would come into question. So that’s how it started and it slowly just came to life and changed from what I would do to what these characters would do.

What makes ‘More Than Me (Vol 2)’ stand out in this genre? What should a reader expect from it?

I’ve seen a lot of Christian fiction stories that seem like everything just ends up sweet and pretty at the end or as soon as they decide to follow God and that’s just not the case in real life. I hope that this series stands out by being more relatable to real life and real people with real struggles.

The story subtly incorporates spiritual values such as faith and understanding. What was the hardest & the easiest thing to write such a story?

The easiest thing: Compassion. I’ve been in situations I never thought I would be and have done things I’ve said I’d never do so I know when you’re in certain situations, it’s no longer black and white.

These experiences have shaped my ability to extend grace to people who may not seem to deserve it to the average person. The hardest thing: hoping I was able to explain God’s character in a way that is accurate and clear.

Any special experience about writing the second volume of ‘More than Me’ that you would like to share.

This book showed me that I can definitely get irritated with my character’s choices.

I would absolutely love to see my characters on the big (or small) screen! Until then, I’ll just have to win people over one reader at a time.

My new project (most likely a series) is called The Light People. It will be about a woman that discovers the ability to time travel…and then she discovers she’s not alone.

While I would never consider any of my books failures, I would consider them successful when they start paying the bills.

Do you prefer self-publishing or traditional publishing and why?

I’m a bit of a control freak, so I like the freedom and control that self-publishing allows. But there are many aspects of publishing I would gladly hand over to people who’ve build careers around it!

There’s an audience (and critics) for everything. Write the story! Don’t waste too much time on “never do this in your writing” videos/articles. It’s overwhelming and highly discouraging. Do spend time developing your writing/editing skills. Cut filter words! This will make your story better!

My contacts at Vowelor have been super helpful and encouraging. Their service is a great help and great value for new authors!

Author Vinquita Romaine: Giving a chance to find oneself again

Author Sharon Walton: Writing stories for kids that help them be brave instead of succumbing to their fears

Author Vinquita Romaine: Giving a chance to find oneself again

Author Sharon Walton: Writing stories for kids that help them be...