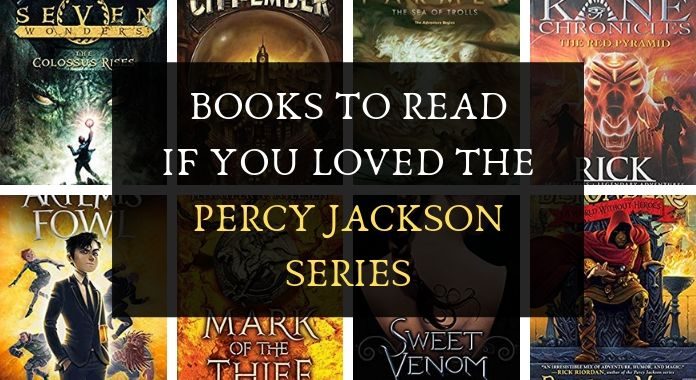 I used to read Percy Jackson series when I was kid (may be 5th grade) and always wanted to get my hands on more books like Percy Jackson.

If you are anything like me then, you have landed at the right place!

From all the books I have read, today, I am listing out my handpicked books that I find very similar to Percy Jackson series by Rick Riordan.

I have added these novels in this list considering their elements of writing and story in common with Percy Jackson books. Though the plots of each of the stories will be different, the thrill and adventure will be the same (or even more).

Here are the 13 best recommendations for books similar to Percy Jackson. Have a look!

Now let’s take a look at each of these books in more detail. I promise to give no spoilers! 🙂

1. The Apothecary by Maile Meloy

After reading Percy Jackson, my friend recommended me to read The Apothecary and I regret not reading it earlier.

It is the story of a fourteen-year-old boy Janie who has recently moved to London from Los Angles. Here he becomes friends with Benjamin who aspires to be a spy.

When Benjamin’s father got abducted they had to unveil the secrets from apothecary’s sacred book, the Pharmacopoeia, in order to find him. They need to protect it from the Russian spies who possess nuclear weapons.

On the quest of finding Benjamin’s father, Janie and Benjamin set their journey on the dangerous path of saving Apothecary and impending the disaster.

2. A World Without Heroes by Brandon Mull 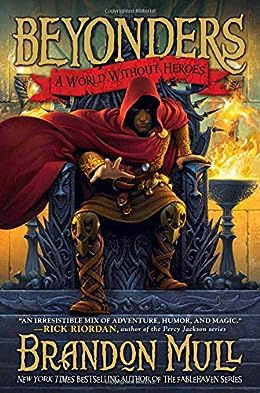 The second one in the list of books related to Percy Jackson is A World Without Heroes. It is the first book of the Beyonder Series written by Brandon Mull.

Everyone likes a happening life and so did Jason. Until one day while he was in the zoo, he heard some music coming from the Hippo’s mouth. He leaned in to see and suddenly hippo swallowed him.

Instead of being digested, he was transported to some other world known as Lyrian. Things are not as peaceful as they used to be in the past in this world as they no more welcome the visitors from the past.

Jason meets a girl, Rachel, who has also accidentally fallen into this place. Together, they decide to destroy the new wizard emperor, Maldor, hoping that they would save this world without heroes.

3. Mark of the Thief by Jennifer Nielsen (Series) 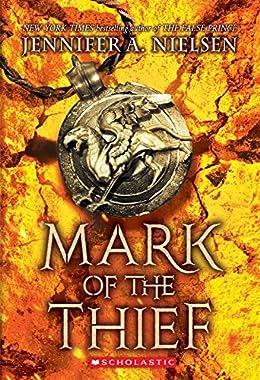 Mark of the Thief is yet another amazing book for someone looking for some good books like Percy Jackson. And, if you like reading about the ancient Greek and Roman histories then this is the perfect book for you.

Nic is a slave in the mines outside of Rome. His life is changed when he finds a bulla in the mines which once belong to Julius Ceasar. The bulla has strange powers that after finding it Nic became the most wanted men in the Roman Empire.

After wearing the bulla amulet and with the power in his veins, Nic decides to free himself from slavery. Instead, he finds himself at the center of a ruthless conspiracy to overthrow the emperor and spark the Praetor War, a battle to destroy Rome from within.

The Colossus Rises is the first book of the famous Seven Wonder Series by Peter Lerangis. It is based on Greek mythology and revolves around the seven wonders of the ancient world.

Jack McKinley is an ordinary boy but with an extraordinary problem. He needs to find loculi that when combined can cure him or else he will die.

The only problem is the loculi are the relics of a lost civilization and haven’t been seen in thousands of years. However, they might be hidden in the Seven Wonders of the ancient world.

I bet you are going to have so much fun while reading this books series. 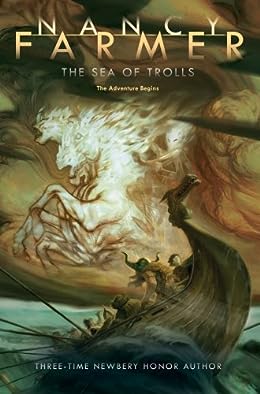 Honestly speaking, initially, I thought The Sea of Trolls would be for kids. But once I finished the series, I was captivated by the story and could not stop myself from adding this book in my list of books like Percy Jackson series.

This is a story about two siblings; 11-year-old Jack and his little sister, Lucy. They are the slaves of Olaf One-Brow and his fierce young shipmate, Thorgil.

Jack and Lucy are kidnapped by Vikings and taken to the court of Ivar the Boneless. But Jack’s life becomes worse when he sets his journey on the quest to find the magical Mimir’s Well at the cost of his sister’s life.

You will be sailing through these 500 pages to find out what happens next to Jack and Lucy.

6. The City of Ember by Jeanne Duprau (Ember Series)

The City of Ember is a post-apocalyptic science fiction written by Jeanne Duprau. It was published in 2003 and is followed by The People of Sparks as the second book in the series.

This time a city is saved by two children; Lina and Doon.

Ember was built hundreds of years ago by the builders with everything for human survival. But soon the city will run out of food and crops. Ember is under the dark shadows of the corruption which will be soon engulfed in the darkness.

The climax of the story is when Lina and Doon discover the fragments of an ancient parchment which can save Ember. But, Will the people of Ember listen to them?

Alike Percy Jackson books, The City of Embers is also a pulse-pounding page-turner novel and I think you should definitely read it. 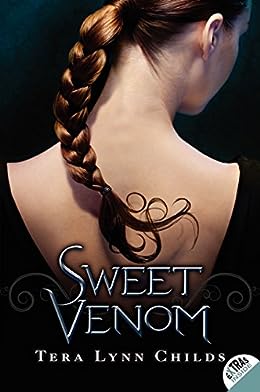 Sweet Venom is one of the must-read books like Percy Jackson for adults.

Grace has just moved to San Francisco and is very excited to start her new school. Things get changed when a minotaur walks in the door and a girl who looks like her replica fights with the monster.

Gretchen is tired of pulling out by a monster on the unexpected hour. But she has never thought of running into a girl who exactly looks like her.

So far, Greer’s life is normal. But her world turns upside down when she sees two girls, almost similar to her and claims that they are triplets.

You don’t need to think twice for choosing this book as your next book like Percy Jackson.

Artemis Fowl Series is as happening and thrilling book series like Percy Jackson. It includes eight science-fiction fantasy novels. By 2020, the first two books of the series will be adapted as a movie by Disney.

Artemis, the protagonist of the story is a twelve years old boy and a millionaire. This teenaged genius is a criminal mastermind. He has kidnapped a fairy, Captain Holly Short of the LEPrecon Unit to exploit the magical Fairy people.

Don’t misunderstand the fairies as the bedtime fairies rather they are dangerous. Read this books series and help Artemis to restore his family’s fortune.

Who could write books similar to Percy Jackson better than Rick Riordan himself? That is the reason I recommend The Red pyramid on this list.

Set in the ancient Egyptian times, The Red Pyramid has been on the New York Times number one bestseller list. This is the first book of the mystical adventure followed by Throne of Fire and The Serpents Shadow.

First time after their mother’s death, Carter and Sadie are together for a trip with their father Julius Kane. As his said promise to set everything right, Julius Kane accidentally summons the God of Evil while their trip in the museum.

Carter and Sadie embark their journey to find their father who has been kidnapped by the Gods. Many secrets will be revealed and they will come closer to the truths about their family and its links to the House of Life.

10. The Flame of Olympus by Kate O’Hearn (Pegasus Series) 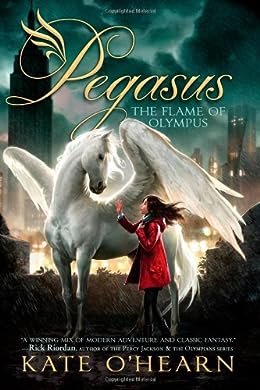 Percy Jackson fans will be more than happy to read this fantastical adventure book.

The story begins when Pegasus, a winged horse, crashes into the Manhattan roof during a horrifying storm. Emily found the Pegasus and was impelled to be the center of the mythical war between the Roman gods and a terrifying race of multi-armed stone warriors called the Nirads.

Later she was allied with a thief named Paelen, the goddess Diana, and a boy named Joel who helped her to return Pegasus to Olympus.

Emily is all set to fight with monsters and to fly with Pegasus before the time is out. 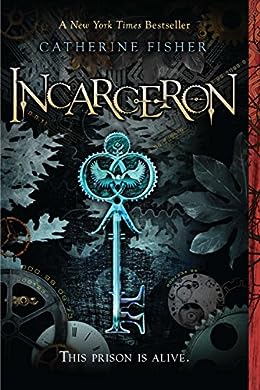 Another book in this handpicked list of Percy Jackson read-alikes is Incarceron.

Incarceron is a vast and ‘living’ prison. It has its own world inside where the view of the outside world is blocked for the descendants of the original world prisoners who live in its darkness.

Finn was born in the Incarceron and has never been to the outside world. But his haunting visions from outside always encourage him to escape the Incarceron.

In the outer world, Claudia, daughter of the warden of the prison is trapped on her own kind of prison. She is stuck in her arranged marriage and is determined to escape from it.

Things change for both of them when they find a silver crystal key through which they both can talk to each other and make a plan to escape from their respective prisons.

This story is unbelievably amazing and will take you to the fantasy world where you would never want to escape from.

12. The Ruins of Gorlan by John Flanagan (Ranger’s Apprentice) 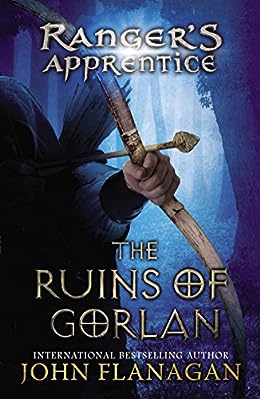 Trust me you will thank me later for recommending Rangers Apprentice!

The 15-year-old, Will, has a completely different concept in his mind for the Ranger who fight battles to protect the people. He is scared of them and like other villagers, he also believes that Rangers practice magic that makes them invisible to ordinary people.

But now, Will has been chosen as one of the Ranger’s Apprentice and he has no clue that there is a large battle about to outbreak as the exiled Morgarath, is planning to attack.

This is the internationally bestselling series with the sale of over 5 million copies in the US alone. This epic story of villains and heroes is worth read after reading Percy Jackson books series.

13. The Sword of Summer by Rick Riordan (Magnus Chase Series)

The last in the list of books similar to Percy Jackson is The Sword of Summer which is the first books of the Magnus Chase series and has been the winner of Goodreads Choice Award 2015.

Magnus Chase is living a lonely life ever since his mother has told him to run. He is always ahead of the police and is surviving on his wits on the streets of Boston.

He finds out that his uncle Randolph about whom his mother has always warned him is tracking him down. Now, Randolph is in the clutched of Magnus. He rumbles about the Norse history and Magnus’s birthright of having a weapon which has been lost thousands of years ago.

Here end my recommendations for the books like Percy Jackson. I believe each book I have suggested you is worth the read.

I had a great time reading all these books but the one I liked the most is Incarceron by Catherine Fisher because of its mysterious plot and the compelling story which makes it a best one to compare with Percy Jackson.

Hope you too find your favorite book from the list.