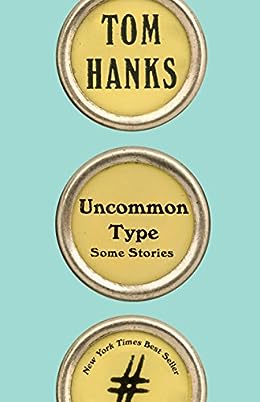 Uncommon Type is Tom Hanks first book which is a collection of 17 short stories written during the period of the last two years. The Hollywood veteran and two-time Oscar winner, Tom Hanks has written his first book with an uncommon theme of typewriters. The book, Uncommon Type: Some Stories by Tom Hanks, is set to release on 24 October 2017.

Tom Hanks debut book, Uncommon Type, features seventeen short stories on varied subjects. The tales in his book includes a story of an eastern European immigrant who arrives in New York after a civil war. Another story is about a perfectionist bowl player who becomes ESPN’s celebrity and ultimately ends up ruined. In the Uncommon Type by Tom Hanks, there is also a story about a billionaire and his colleague who are looking for something big in America.  These are just some of the tales Tom Hanks tells in this first collection of his short stories.

Among all the 17 short stories from Tom Hanks first book, Uncommon Type, one thing is common that is the click-clack of the scarce and vintage typewriters. The first book of Tom Hanks is definitely surprising, intelligent and heartwarming.

This is a pre-release review of Uncommon Type: Some Stories by Tom Hanks which will be updated after the release of the book. The release date of the book is 24 Oct 2017. Meanwhile, you can order your copy on Amazon.

About the Author: Tom Hanks

Tom Hanks, 60, is an American actor and filmmaker who has appeared in many famous Hollywood movies including Forrest Gump, Big, The Da Vinci Code etc. In 1979, Tom acted in his very first film after studying theatre in California.

His career as an actor has been extremely successful. Tom has won two Oscars, two Golden Globe awards, the Best Actors Guild Awards making him one of the finest actors of Hollywood. In 2015, Tom started writing his first book, Uncommon Type: Some Stories which is set to publish in October 2017.