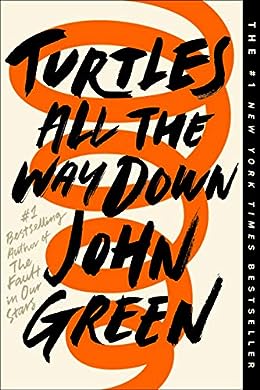 Turtles All The Way Down is written by #1 Bestselling Author John Green. It was published in the year 2017 and as soon as it hit the markets, it became the Book of the Year. The book has been praised by many for its theme, writing style and was highly critically acclaimed.

You might be thinking of dropping the book after reading the title. Right?

No, don’t even think of doing it. It’s not as weird as it seems.

To be honest, when the first time I heard about this latest book by John Green, I had no intentions of reading it. But it’s the weird title that actually intrigued me to read the book and since then, I am recommending this book to as many people as I can.

But before we begin, let’s hear out the first chapter of the book, turtles all the way down in the voice of none other than John Green himself.

Also, Have a look: All John Green Books List

So here’s my Turtles All Way Down Review. Hope you will like it and grab a copy of the book.

Turtles All The Way Down Review

Before knowing about the story, let’s just meet the characters first.

Turtles All The Way Down Summary

Aza is a sixteen-year-old young girl whose life seems normal but not at all simple. She is a troubled teenager suffering from Obsessive-Compulsive Disorder (OCD) and several anxiety disorders.

Most of the time, Aza’s mind is consumed with the thought of infection she might get from the open wound on her finger. To prevent the infection, she constantly keeps on draining the fluid from the wound by cutting and slicing it with her thumbnail. Even when she is talking to someone or occupied in some activity all her brain could think about is an invasion of fatal C. Diff infection in her body.

“Nobody gets anybody else, not really. We’re all stuck inside ourselves.”

In the age when Aza should be dating boys and doing stupid teenage mistakes, she is persistently in a battle with her thoughts. This ceased her to make many friends but still manages to have one.

The only friend Aza has since elementary school is Daisy. She is completely opposite version of Aza. Daisy is an extrovert, fearless and a Star Wars Fan Fiction writer.

The story takes its twist when Daisy finds out that Rusell Pikett (a billionaire) is missing and Aza knew his son, Davis from the summer camp (though they haven’t seen each other since then). She asks Aza to use her connections which can help them in earning $100,000 if they find out about Rusell Pickett.

Davis is the closest thing to a celebrity that Aza has ever witnessed. He had a huge luxurious house (with a cinema in it), but still, he had his own set of problems to deal with.

Aza finds herself drawn to Davis but things didn’t go as they were planned. Also, it has become very important to find Davis’s father seeing his struggle to keep his and his brother’s world together.

“Anybody can look at you. It’s quite rare to find someone who sees the same world you see.”

I am not going to tell you the whole story. Now you need to read the book to know whether Aza and Davis end up together or not? Were Daisy and Aza able to find Rusell Pickett? And what happened to Aza and her mental illness?

Turtles All The Way Down lets you peek into the lives of people who are struggling with mental illness.

Now Read how I felt after reading Turtles All The Way Down book.

My Thoughts on Turtles All The Way Down

I felt that Turtles All The Way Down is not a regular book. You will not only read this book rather you will feel it. However, if you read books only for fun, then this can be an intense fun activity.

I felt as if I am sitting in the head of a teenager and looking at the world through her perspective. The way Aza keeps on slicing her middle finger wound and always terrified of the deadly infection, I myself felt like being cautious of it.

John Green has done a commendable job in writing such a great teen story with the basic question with which every teenager suffers. Through his story, John Green answered questions like Who I am? What is my purpose? and other questions which they dart on themselves.

The author has brilliantly talked about the mental illness giving the insight into how people struggle with mental disorders.

Once you start reading Turtles All The Way Down, there is no way coming back from Aza’s world. You will be so indulged in the book that Daisy will become your best friend, you too will love Davis, and finding his father will become YOUR mission.

I am damn sure that this book is going to stay with you for a very long time. This type of books are the ones which give book hangovers and a hard time to get rid of it.