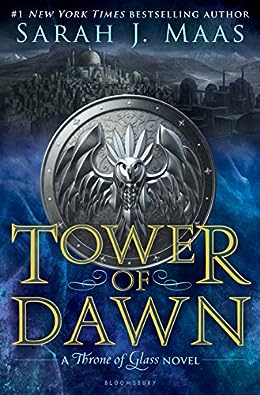 Tower of Dawn by Sarah J Maas is the sixth book in the Throne of Glass series. The book is actually not a sequel but a companion novel about Chaol Westfall, the Captain of the Gaurd. Sarah J Maas did the Tower of Dawn cover reveal on her official site in June this year and now announced that Tower of Dawn will be published on 5th Sep 2017.

Sarah J Maas did the Tower of Dawn cover reveal on her official site in June this year and now announced that Tower of Dawn will be published on 5th Sep 2017.

Tower of Dawn, the latest installment of the Throne of Glass series, is a separate adventure of Chaol Westfall as he goes on an epic journey towards a southern empire of Antica. Tower of Dawn by Sarah J Maas doesn’t actually match the rest of the series. But do remember that Tower of Dawn is a spinoff that happens in a totally different empire. It’s not directly in line with the story of Throne of Glass, but it takes place in the same universe and connected with Aelin’s tale.

Previously when everything was shattered including the Glass castle, King of Ardlan had spared Chaol’s life but he ended up with a broken body.

The only cure for his broken body can be found through the legendary healers of Torre Cesme in Antica. And the latest book, Tower of Dawn by Sarah J Maas follows the warrior on this expedition to Antica.

But, healing is not only what Chaol can take away from Antica. As the war is approaching over Dorian and Aelin, Chaol must convince the rulers of Antica to become an ally with them. Nesryn joins him for this task.

Towards the end of the book Tower of Dawn, Chaol makes a vital discovery that can save Erilea and change both of them in a way they have never imagined.

Tower of Dawn Book Review: Sarah J Maas’s new book Tower of Dawn is the sixth novel in the Throne of Glass series.

About the Author: Sarah J Maas

Born in 1986, Sarah J Maas is a bestselling American fantasy novelist. Her debut book ‘Throne of Glass’ was published in 2012 and it became a big success. In the next few years, Sarah established her name as a favorite fantasy author next to JK Rowling.

Her famous works include the six novels in the Throne of Glass series and the three books from The Court of Thorn and Roses Saga.