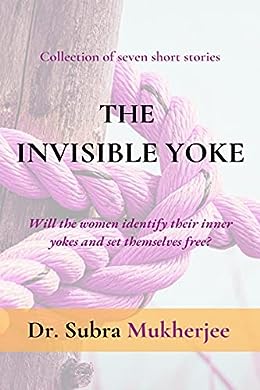 The Invisible Yoke by Dr. Subra Mukherjee is an amazing book with seven short stories about how a lady deals with the norms that are made by society since childhood. Targeted for women facing situations in her day to day life, this book was published in May 2021.

The novel revolves around the stories of women of different age groups suffering in different ways by societal norms.

Dr. Subra Mukherjee had beautifully introduced stories that are quite similar to what a woman faces almost every day while stepping out of their houses.

They were busy making plans for Canada, and I was there sitting on the floor with tears diluting my tea. That moment was more painful than my father forcing me to marry for 20 thousand rupees in return, because I had no expectations from my father. “Charil, pack your bags and be ready; I will soon come and take you,” said granny ignoring my tears. “And enough rest for a maid, get up from the floor and get to work; at my place, you can’t sit and rest like this,” she continued. “I apologize, granny, but I can’t come along with you to your house. Besides, you need not keep reminding me of my previous profession. I am proud of what I did, and I am not ashamed of that,” I replied in a very polite affirmative tone.

I could see a smile on Mr. Basu’s face while Mrs. Nishma was in tears, and granny surprisingly looked at me with a charming smile. “That’s all we want from you, dear,” said Mrs. Nishma in a tearful tone, suddenly hugging me tight; she did once hug me before, on the day when she brought me here a few years back. 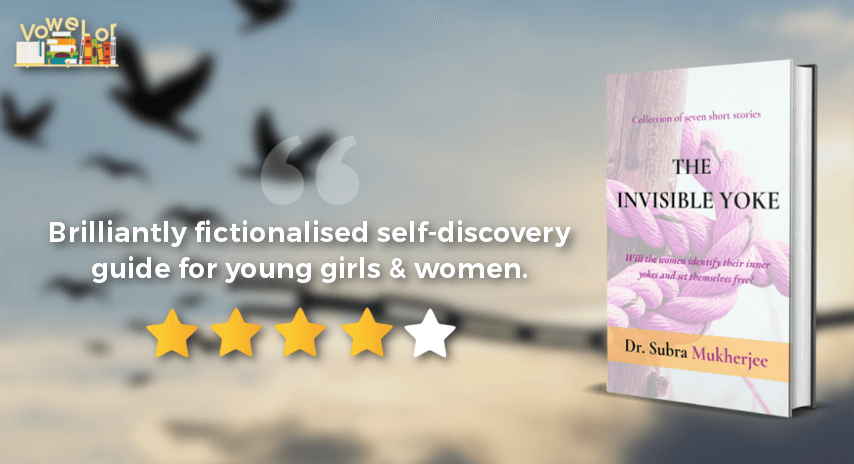 The Invisible Yoke is written in seven different stories. Each part is beautifully portrayed stating the causes a woman faces while growing up or during their adulthood.

The first story, Revelation, is about a 16-year-old girl, Albeena whose parents had never been happy because of her messy behavior. Being a studious kid, studying 10 hours straight. She doesn’t have friends, she never went on school picnics or participated in any school functions. Despite all that, they asked to do she could not make them happy. One day, her parents were called to the school by the principal to discuss her curriculum status.

But, things went way beyond her hand when she got curious to know what the principal discussed and sneaked in secretly to her parent’s room and heard what she should not have.

The second story, Privileged, is about a successful woman named Luvyna, who had worked every inch to reach a point where she wanted to see herself all her life. She is now the vice-president of a multinational IT company. Her husband was supportive during all her career achievements. But, there were people who commented on her privileged cycle. But, little did they know that she was not fortunate in the case of a child, she lost her baby. Her son lost his battle 3 hours after birth. She broke into tears when people remarked that she was lucky to attain everything smoothly in her career.

The third story, Self Maid, is about a young girl Charil, whose drunkard father made her work as a maid from the age of 14. She was not good at studies but was always interested in it and wanted to complete high school.

Mrs. Nishma Basu saw Charil for the first time in a care center, where she was brought by a group of social activists ladies. Mrs. Nishma Basu brought Charil with her when she was 18, and that was a turning point in Charil’s life, where everyone in the family made sure Charil could complete her studies.

The fourth story, “Coat”, is about Mom and her daughter, who lost his father at a very young age. She wanted her son to study in a big school. But, their income was a penny as a salesperson in a small clothing store.

Mom decides to seek help from her brother to help him complete his further studies at PHSS school and he questions the need of making her study in such a big school when they can’t afford it. He kept on saying that she will get married ultimately then it’s of no use in wasting money on her education.

In the end, the daughter promises to work hard and earn on their own rather than seeking help from someone.

The fifth story Knots is about “Chacha” who owned a bookbinding press. A little girl came to visit him every day for Nankhatai biscuits. Chacha would also stitch her new notebooks for school and she would write her names on them.

One day Chacha shares with the little girl how he became a bookbinder. He tells her his father made him work in a mill for 12-15 hours daily when he was just 11 years old.

The mill owner wanted to expand his business with printing/binding press and chose him to join. But, Chacha never wanted to leave his Amma alone.

Somehow, Amma managed to convince the mill owner and she joined the press with his son. There he worked hard to learn the craft and became a bookbinder himself.

The little girl felt sorry for Chacha’s struggling childhood, and he made her understand that in spite of all the differences she has between her parents they are providing her with good resources and sending her to a great school for studying.

The sixth story “Two boats” is about two childhood girlfriends, Nidhi was an extrovert while Shorsha that Nidhi used to call her was an introvert. It was the time when Shorsha’s marriage date got fixed and her house was filled with relatives and neighbors, everyone was busy celebrating this good news.

Shorsha felt a little left out since Nidhi was the dearest of all, she was perfect, she performed best in her school curriculums and she was a well-trained classical dancer. She was basically the daughter Shorsha’s parents always wished for.

Shorsha was feeling jealous of her faultless attitude towards everyone. That day Nidhi stayed over and noticed Shorsha behaving weirdly towards her. She asked her again and again and when she could not control her emotion she burst out and told her everything.

Then, Nidhi shares that she also had her share of imperfections and struggles. She tells Shorsha that she is an orphan who grew up in her maternal aunt’s house. Nidhi was always in this social worker mode, ever helping, the selfless girl. All she wanted was Shorsha to be happy with someone and not escape in the name of marriage.

The seventh story was Genesis, a story about Nirupa, a dark complexion, but, a bright student who had always won medals for her great remarks and works. The day Nirupa was getting married, she felt lovely with all the attention and photographers and videographers focusing on her, everyone congratulated her for the wedding.

She was asked to behave like a bride when asked for food, she was allowed to eat after the ritual ended. And finally, when it started, she felt a little dizzy and tired, all she could see was blurred faces. Her mother shouted from behind asking her about the spectacles, but her in-laws did not allow her to wear that thick black frame.

When the ceremony ended, the newly-wed couple went to their room. The groom asked her to wait for a moment while he went to talk to his mother. When he returned back he handed over the spectacles to her. Both of them looked and just smiled.

All the stories in The Invisible Yoke beautifully deal with the circumstances that a woman faces. If something is common between all the stories is that women are asked to stay silent and do with what society asks them to do.

✅ Get your copy of The Invisible Yoke by Dr. Subra Mukherjee on Amazon now!

All the stories in The Invisible Yoke beautifully deal with the circumstances that a woman faces. If something is common between all the stories is that women are asked to stay silent and do with what society asks them to do.

Talking about Dr. Subra’s writing style, she shows brilliant use of the simple language making it is a very easy read. Also, Subra has done a great job of making the characters feel like real people around us which makes you get attached to them. And, that’s a really difficult feat to achieve in short story format.

No matter if you’re a man or a woman, The Invisible Yoke clearly makes you sit back and think about what’s stopping us from being at our true potential and how we are conditioned to accept the ‘yokes’ that limit us.

Overall, The Invisible yoke by Dr. Subra Mukherjee is a brilliantly fictionalized way of discovering the bottlenecks and realizing what we can achieve if we free ourselves from these ‘invisible yokes’.

About the Author: Dr. Subra Mukherjee

Dr. Subra Mukherjee is an author, educator, trainer, researcher, and learner; in short a true student of life. Her first book ‘The Invisible Yoke’ was published in May 2021. Within a few months, she published her second ‘The Power of Self-Awareness’.

Her love for books started from the age of 8 that led to her becoming an avid reader and ultimately a writer herself!

She is a B.Tech, M.Tech, and Ph.D. degree holder having 15+ research papers published in International journals. Read the exclusive interview of Dr. Subra Mukherjee with Vowelor to learn more about her life, works, and future plans.