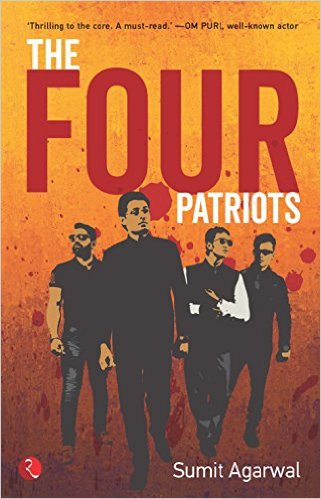 The Four Patriots is an attempt by  Sumit Agarwal to introduce Patriotic fiction among the Indian readers. The Four Patriots is about how common Indians, who often fall victim to the so-called system, can come together and fight for the country and the fellow countrymen if found necessary.

The Four Patriots by Sumit Agarwal is the story of four Indians – Varun, an NRI software engineer; Salman, CEO of Coffee Moments; Raghav, a virtuous politician and Aditya, an altruistic businessman. The characterization is done in way that any reader could relate to at least one of the protagonist.

The Four Patriots are these four characters who become the unlikely heroes and face the inevitable evil forces that aim to captivate India. There is a lot of suspense and most of the incidents are those you don’t see coming. For the sake of Nation’s future, these four patriots risk their lives and dare to enter the labyrinth weaved intricately by the enemies of the nation.

The Four Patriots by Sumit Agarwal is all about faith, courage, friendship and most importantly, Patriotism. With lots of twists and turns, this book is sure to awaken the patriot in you.

A fast paced thriller aimed for the youngsters of the country. Very relatable to the prevailing conditions and how everyone together can make a difference.

About the Author : Sumit Agarwal

Sumit Agarwal is the debut author of the book The Four Patriot. He is a graduate for IIT Kanpur. Besides being a successful businessman. Sumit is a man of many talents. He is a music composer, singer, actor, lyricist and writer.

Sumit Agarwal also looks after his NGO, Prerna which is dedicated to various social welfare initiatives in the education. He is also an activist towards clean and answerable politics.