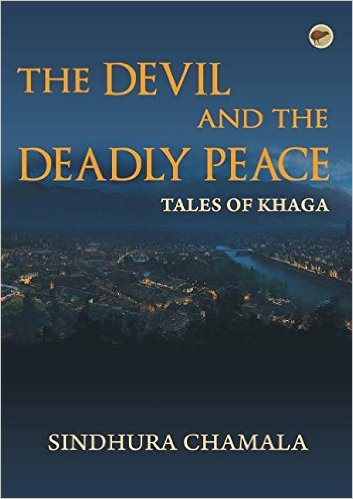 Book Review : The Devil and the Deadly Peace by Sindhura Chamala

The book is set in three kingdoms; Jalika being the common trade nation of the other two. The location of the kingdoms is left to reader’s imagination as there is no image to give an idea about it unlike the Games of Thrones. The story of The Devil and the Deadly Peace begins with the suspicious death of the King of Jalika just before an important Peace Treaty. The King had maintained peace among the kingdoms with his policy of trade but his demise makes the two nations stand almost on the verge of war.

The characters of the novel, The Devil and The Deadly Peace by Sindhura Chamala, are well thought and portrayed cleverly. The characters of the Devil, the Little Brother and Angla are impressive. Another positive thing about the debut novel by Sindhura is the expression of details in almost every scene. It enables the reader to actually recreate the world what the author has imagined.

After the mysterious death, the Prince of Jalika reluctantly agrees to take over the reigns. A mission is set out to decipher the death of the King. Four Brothers and Devil team up, assisted by Angla, to find out the culprit and the reason behind the death. The whole mission is filled with utter suspense and gripping until the end. Let alone few portions, everything in the story is engaging and least predictable.

About the Author : Sindhura Chamala

Born in a small town of Nalgonda near Hyderabad city in India, Sindhura Chamala studies Information Systems at BITS Pilani (Goa Campus). She currently works as a Data Storage engineer in Bangalore.

Sindhura’s writing journey started with some random thoughts during an evening walking. And, she turned them into a gripping fantasy novel. She is also an avid reader in herself and always manages to take out time to read.