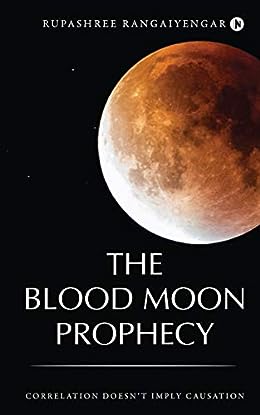 The Blood Moon Prophecy is a riveting novel that traverses through time set against backdrops of four places – Southern Mexico, India, Egypt, and an undisclosed location. This book is written by Rupashree Rangaiyengar and published by Notion Press in the year 2021.

This novel deals with a father’s quest for justice, a teacher’s efforts to educate, and a tribe’s sacrifice for the future. But none of them escaped the terrible outcomes.

In this novel, a thread was woven connecting a Mayan Hieroglyph reader who stumbles on an ancient secret, a bio-hacker who is in trouble with the law of experimentation, a Quantum computing student who discerns a way to save all of humanity.

‘The Blood Moon Prophecy – Correlation doesn’t imply Causation’ is a novel from the science fiction genre.

Although cryptic, what caught my eye were the calculations of future events very similar to the one that occurred, and a clear warning to humanity. Based on the Mayan calendar, the date was inaccurately calculated as Dec 2012; the day the world would end. However, if you all saw my post, it is clear that the calculation was slightly off. The actual date resolves to when the two mighty planets Jupiter and Saturn will align on Dec 21, 2020. This is preceded by the Blood Moon occurring on Nov 30, 2020 – the exact circumstances that occurred in 683 AD. Apparently, a large population was wiped out due to mysterious sickness caused by a civil war on an attack from space,” stopped Morris.

A strange eerie silence had befallen the entire room. Everyone looked panicked.
After taking a deep breath, Morris continued, “The Aj Sul’s coup was discovered and the people accused him of treachery. At the same time, the kingdom seemed to have started a war with hostile neighbors. The Aj Sul led a victorious battle, and due to unknown reasons, left Palenque to go to the caves in Yucatan with his entire army. They seemed to have perished there.

The Blood Moon Prophecy is written in four parts, hence, four individual stories. Each part is further divided into chapters.

The first part, The Genesis, is about the kingdoms of Maya City, Southern Mexico. The timeline is 683 AD. In this story, Aj Sul, the military commander conspired against his king Pacal to avenge her daughter’s untimely death. In the end, the entire race of the kingdom suffered from some kind of disaster followed by a horrible end. But before dying, Pacal decoded the prophecy and gave it to Aj Sul who engraved it within the walls of the vault.

The second story, The Recurrence, is the story of the Kingdom of North Karnataka, India in the time of 670 AD. It is about a 60-year old scholar who saved Kali, a six-year-old girl, and provided her education.

After growing up Kali took the responsibility to save mankind from a pandemic. ‘Kali Sukthi’, the document with 1024 shlokas was developed by Kali espousing her extensive research on the disease to combat the deadly pandemic that decimated multiple Chalukya provinces.

The third story, The Resurgence, is about Aurelianus and lady Ophelia and their struggle to save the greater good of Science and Research fighting against the orthodox notions.

The fourth part, The Renascence, talks about a project called the Great Maya Aquifer Project (GAM) at an undisclosed location in 2019 AD. In this story, a thread had been woven to connect all four stories. Here, it is shown that the world is experiencing an impending apocalypse and the connecting thread will help the protagonist to save the world.

This book, however, is dealing with the problem that the world is going to face and in the afterword section, the author had mentioned her next book in the series that will demonstrate the life-threatening journey of the protagonist to unravel the puzzles and attempt to save all of humanity.

✅ Get your copy of The Blood Moon Prophecy by Rupashree Rangaiyengar on Amazon now!

The Blood Moon Prophecy by Rupashree Rangaiyengar is a well-plotted novel from the Science fiction genre. The illustration of the book is fascinating. The concept of connecting all four stories with different timelines was very interesting and well-tried.

The detailing of the characters in each of the stories has been done with proper care. In the first story, the author has created a special language to give it an authentic flavor. In the second story, she has used Sanskrit shlokas to go to the depth of the characters. Images and concepts have been used to make the third story more convincing.

The second story is fast-paced and quite intriguing to read. All the answers are engraved inside the fourth and the last story. The last story has a modern approach to solve the mystery that had arisen in the other three stories. The etching of the situations was done in such a way that the reader could easily visualize the scenarios.

The flow of the narration was done carefully and smartly, and it never felt confusing though there were several intertwined events. This novel has a nice course of action which makes the reader to be engrossed in the book.

The translation of the Shlokas and tribe chants has been placed in the appendix section of the book. It clears the idea for the reader.

The style of writing is catchy and captivating which makes this novel a one-sitting read.

Few flip sides of this novel

The book perhaps needed a preface to make it more comprehensible. There was too much information in this 168-page book that created complexity. It required a bit more patience and elaboration.

The meaning of some zone or tribe-specific new words was written in the bracket just beside the main word making it lose the flavor. The appendix would have been a better placeholder for this purpose.

There was confusion as the name of Aj Sul’s daughter is Izel at the beginning and in the next stages, it is Inez.

Only the problem has been narrated in this book and the sequel has been prescribed for finding the answers to all the mysteries making this book a kind of preface to the next and the main book. With that thought, the price of this book seems a little bit high. 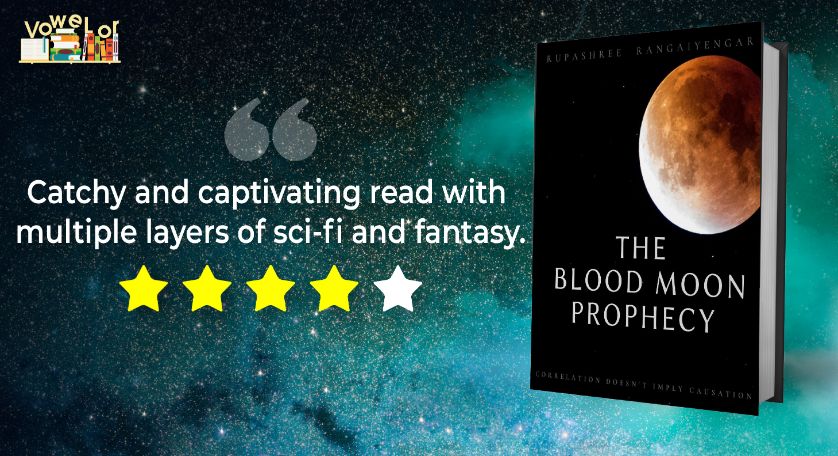 About the author: Rupashree Rangaiyengar

Rupashree Rangaiyengar is an Indian author living in Mysore. She is also a software engineer by profession and a single mother of a 7-yr-old son. Her first book was ‘The Socrates Method & Other Short Stories’ which got published in Aug 2020.

She holds a Masters of Engineering degree in Computer Science from Cornell University, NY. Apart from writing, she is also a good artist, veena player, trekker, and bibliophile at heart.

Rupashree’s latest book is ‘The Blood Moon Prophecy’ which was released in Feb 2021. Read our exclusive interview with Rupashree Rangaiyengar to know more about her life and her upcoming books.

When she is not working, you may find Paulami reviewing books, writing blog posts, or attending literary events. She can read anything and everything that she can get a hold of. She has a small personal library at her house.