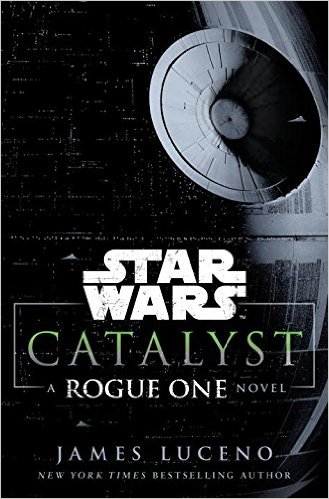 Catalyst Rogue One novel by James Luceno is actually a prequel to the much-awaited movie Rogue One : A Star Wars Story. The novel plays a ‘catalyst’ to set the stage for the movie. The new Star Wars novel Rogue One: Catalyst puts a human face on the Empire’s super-weapon of mass destruction.

With the wars ripping the galaxy apart, Star Wars Catalyst Rogue One novel is about the battles across the stars while building more and more deadly technology in an attempt to win the war. Orson Krennic, a member of the  top secret Death Star project, is determined to develop a superweapon before their enemies can. And an old friend of Krennic’s, the brilliant scientist Galen Erso, plays a key role.

When the foes notice Galen’s pivoting efforts in the energy research, they spearhead after him. But, Krennic rescues Galen and his family from the Separatist kidnappers and leaving him under Krennic’s debt for saving their lives. Now, to repay the same, Galen agrees to continue the energy-research and eventually making Death Star a reality.

Galen is unaware of Krennic’s destructive plans with Death Star. And when he senses the deception, he with his daughter, Jyn put everything on the stake to untwine the tight grasp of Krennic and save themselves and the galaxy.

This new Star Wars novel puts a human face on the Empire’s super-weapon Death Star. Must Read before watching Rouge One : A Star Wars Story

About the Author : James Luceno

James Luceno (born 1947) is a New York Times bestselling author. He has written several Star Wars novels and a dictionary about Star Wars.  His most popular works include Agents of Chaos: Hero’s Trial, Agents of Chaos: Jedi Eclipse and The Unifying Force.

James Luceno’s 2014 novel Star Wars: Tarkin was one of the first four novels published in the franchise after Lucasfilm redefined Star Wars continuity in April 2014. His novel Catalyst : A Rogue One Story is due to be published in November 2016. He has written other novels as well and he wrote the film adaptations for a few movies. Apart from novels, he has also written television cartoon series.