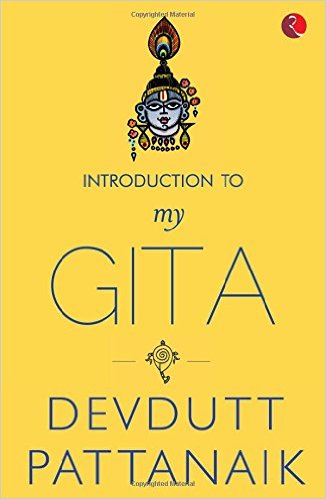 My Gita is written in such a way that it blends with the background and environment of the modern time. Because of the contemporary touch, the 21st-century readers can easily connect with the book and adapt to it. Devdutt Pattanaik has made it relatable to the Indian youth who is mostly unaware of the teachings of Gita.

The Gita originally has thousands of verses and it becomes impossible to read all of them for the reader today. So, Devdutt Pattanaik takes care of this issue by going through various views of the Gita in his book. No wonder, Lord Krishna and Arjuna’s dialogue may seem outlandish in today’s world. But Pattanaik transverses this problem by correlating and adapting the teachings of Lord Krishna to the present times.

Today, when the self is gaining more and more importance, one needs to look into the world that we live in. One needs to understand that we do not live in this world alone; that the love, care and meaning are very important for life.

My Gita by Devdutt Pattanaik is a thought provoking book that talks effortlessly about the relevancy of teachings of Lord Krishna in the modern world. A must-read for youth!

Devdutt Pattanaik is considered as a profound Indian Mythologist. He is known for his famous television show Devlok which aired on Epic. Devdutt has written a number of books on Indian Mythology which connects the modern world with their past. He was a speaker at TEDIndia 2009 and spoke on Myths that Mystify, East versus West.