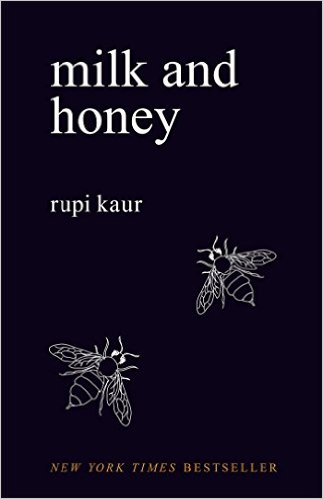 Milk and Honey by Rupi Kaur is a collection of poems twined around love, loss, trauma, healing, and femininity. The whole aesthetic of the book is as minimalist as it’s cover and the title. Each page tells a different story, and each story is short-spoken yet carried such powerful thoughts.

Although the poems are unlike the traditional lyrical poetry but the words make a lasting impact on the reader. A number of poems are written with such sugar-coated sadness that they’ll knock you down.

Check  Out: The Sun and Her Flowers by Rupi Kaur

It is the debut novel of Rupi Kaur and has sold more than half a million copies listing itself into New York Times Best Seller list. Milk and Honey by Rupi Kaur is also the No.1 Bestseller on Amazon in Poetry by Woman.

Anyone who has gone through the pain of loss and trauma in life will be able to relate to Milk and Honey by Rupi Kaur, no matter the gender, age, or scenario. A powerful yet a healing collection.

Rupi Kaur is a writer, photographer and an artist from Toronto, Canada. Being an Indian immigrant, she has to spend more time alone during her school days. It was at the age of 5  when her mother gave her a paint brush and asked to explore herself.

Rupi found more interest in art and writing and eventually pursued her love for language by studying rhetoric at the University of Waterloo. In 2014, she self-published her first collection titled ‘Milk and Honey’. She also owns a website where she shares her experiences.

Rupi is also known in the Internet world post an incident where she voiced against Instagram for deleting her photos on the grounds of obscenity. She got great support from the followers and eventually Instagram has to restore her photos with an apology.