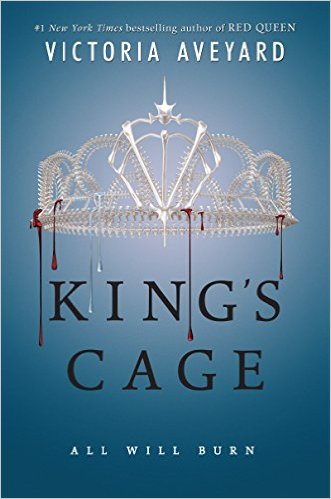 Things have changed since the last book. The story of King’s Cage features Mare Barrow, the lighting girl, who has now lost her powers and spark. Mare ends up as a prisoner and tormented by her lethal mistakes. Maven, the prince whom Mare loved once, has now become the King and still on the path of betrayal. He continues the vicious strategies of her dead mother to control his country and his prisoner. the Reds organize and train themselves for a rebellion to free Mare. And Cal, the exiled prince, pushes all the limits to bring her back for sake of

King’s Cage by Victoria Aveyard comes to a conclusive turn when the Reds organize and train themselves for a rebellion to free Mare. And Cal, the exiled prince, pushes all the limits to bring her back for sake of love.

This is a pre-release review of King’s Cage by Victoria Aveyard and it will be updated after the release. The book is set to release on February 07, 2017.

About the Author : Victoria Aveyard

Victoria Aveyard is an American fantasy fiction author. Born in Massachusett, US, Victoria Aveyard developed an interest in writing at a very early age. She went to study Screen Writing at the University of South California.

In 2012, a year after graduating from university, Victoria Aveyard wrote her first novel Red Queen. She published the novel in 2015 and it fetched her the Goodreads Choice Awards 2015 for Best debut novel. She announced that Red Queen is a four book series and also wrote few novellas too. The final book of the Red Queen series is expected to release in 2018.