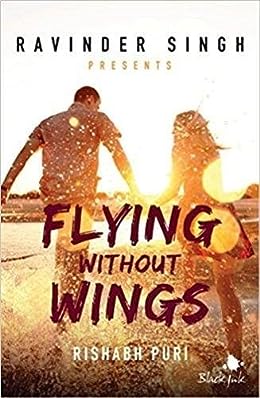 There are many Entrepreneurs who write and most of them are motivational books. But today the book we are discussing is a soft and placid story which is written by a full-time international businessman of Indian origin. It’s Flying Without Wings by Rishabh Puri which got published in October 2017.

Let’s dive straight into our review of Flying Without Wings by Rishabh Puri and know why you should read this book.

Flying Without Wings is the second novel written by Rishabh Puri. The book carries a nice blend of emotions, hope, love and trust. With a fluid narration in third person, Rishabh does not disappoint the reader even once.

The book is set in Chandigarh and the story is weaved around two main characters – Mili Bajwa and Karan Singhania. Mili has dreams of flying free but is caged in a low-grade job at the Chandigarh airport. And her mother became addicted to drugs after the death of Mili’s brother. Mili is the only one earning and somehow running the withered home.

On the other hand, Karan is a mysterious young multi-millionaire businessman who is seeking a true and trustworthy companion, unlike the girls who everything just for having a chunk of wealth and social status.

Seeking a something else from their lives, Karan and Mili find each other on a dating app. Their chats work as a small window to each other’s world where they could only see to the extent they wanted to share. As the book Flying Without Wings progresses further, they become each other’s escape from all the struggles they face in their respective lives.

Suddenly, the bond breaks and there remain several unanswered questions. While Karan is fighting pain from his childhood disease, Mili couldn’t understand what just happened to her. That’s where the trials of the characters begin.

With love in their hearts and hopes for coming together fighting all the odds, they find the real meaning of love and sacrifice.

Why should you Flying Without Wings by Rishabh Puri?

Rishabh has crafted the whole story word-by-word that will make you feel all the emotions to the deepest. Karan and Mili go through such experiences that are pretty relatable especially to the younger couples.

Other characters like Mili’s mother, Mili’s childhood friend Rahul who is in love with her, Karans’ friend and assistant Amit; all seem very real.

Go ahead and get your copy of Flying Without Wings by Rishabh Puri on Amazon now!

A soft and placid blend of emotions, hope, love and trust. Makes up for a lovely weekend YA read.

About the Author: Rishabh Puri

Born in 1987, Rishabh Puri is an International Businessman, Entrepreneur and Author. He belongs to Chandigarh, India but was brought up Nigeria. Rishabh joined his family business when was only 18 and completed his Master’s degree in Business Administration from the United Kingdom.

Currently, Rishabh is the Executive Director of Global Sterlings Products Pvt Ltd. His first novel ‘In the Heart of Hope’ was published in June 2017. Rishabh released his latest novel Flying Without Wings in October 2017.