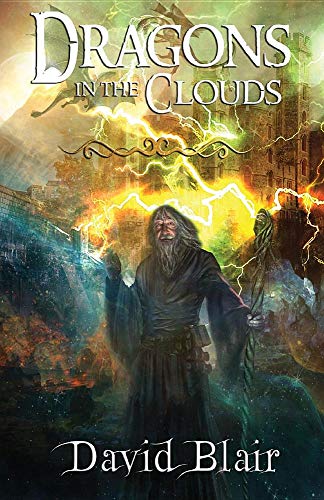 Dragons in the Clouds by David Blair is a fantasy fiction story that deals with the adventurous tale of Dragons and their inexplicable link with lightning and thunder.

This book is Author David Blair’s debut novel and the story is primarily meant for kids between 8-12 years. But, anyone who loves books like Harry Potter would definitely enjoy reading Dragons in the Clouds as well.

Book Review: Dragons in the Clouds by David Blair

Dragons in the Cloud tells the story of the fierce fight amongst dragons, people and amongst dragons themselves and how people finally got rid of them.

The story starts in the present when a father returning home from an overseas business trip brought the gift of a toy dragon for his eight years old girl.

The father, Mr. Evans, narrates the whole story about the existence and annihilation of dragons on earth, that he himself came across while buying the toy.

The story revolves around powerful forces and their unrelenting search for power for the future of human civilization.

It starts with the funeral ceremony of sir Jonathan, the knight of king Arturus of Albion. His bereaved wife, Jaysha, and his son David could not accept the killing of the knight by a dragon.

King Arturus of Albion ordered the annihilation of all dragons from his kingdom to pacify his subjects terrified by the attack from dragons and also to revenge the killing of his best knight, Sir Jonathan.

The knights headed by Sir Solomon, an ardent friend of late sir Jonathan, lost no time in searching for dragons and killing them.

Meanwhile, David, the son of Jaysha and Jonathan, alerted his best friend Rago, a baby dragon of the plant-eating clan, to find a safe shelter for himself and his family in a place outside this empire.

That was where Merlinius, the wise old wizard came to the aid of the plant-eating dragons. He casts his spell to the dragons in such a way that they were able to defy gravity and stay safely in the cloud.

However, the twist came when Odius, the apprentice of Merlinius, did the same spell with a group of meat-eater dragons. A fierce fight was inevitable.

On the other hand, the courage of the little boy David in trying to save people of Albion, while risking his own life, won him love and respect from the grand old wizard Merlinius.

While the thunders cause by the roaring of dragons and lightning caused by fire from their mouth terrified the people, David courageously fought Odius to save Merlinius from his attack.

However, the real hero of the story is Rago, the baby plant-eating dragon, who sacrificed his own life by putting the crystal ball in the center of the vortex to save the entire human civilization.

The Dragons in the Cloud by David Blair is an amazing tale filled with magic, mystery, imagination, and fantasy that transports us to a different world of imagination. The lucid language used in the book makes it even more appealing to the readers’ mind.

The mind-boggling explanation of the fighting between dragons and the vivid description of the wizard’s laboratory is bound to leave a mark on the readers’ imagination.

In spite of a certain climax, I was left glued to the book until the last page due to its goose-bumpy description of events. For me, it’s a must-read short story that will make you travel in the world of imagination and fantasy.

Dragons in the Clouds by David Blair makes you love to believe in the existence of dragons and magic and fantasy.

After reading this story, next time when you see lightning or hear thunder, you are surely going to think of this tale and search for any ‘dragons in the cloud‘.

About the Author: David Blair

David Blair is a 50 years old American author and released his debut book ‘Dragons in the Clouds’ in November 2018.

David is a trained screenwriter and has also worked as a production supervisor on a CGI film called Dwegons and Leprechauns. His next book is a crime novel called ‘Meaner than the Devil’ which is expected to be published in 2020.

Read the candid conversation in an exclusive interview with Author David Blair with Vowelor.

This review is written by one of our Vowelor Facebook Community member – Paromita Das. She has done her Masters in History and has a passion for teaching. She is an avid and obstinate reader as well as an obsessive painter. She has a love for community social service.