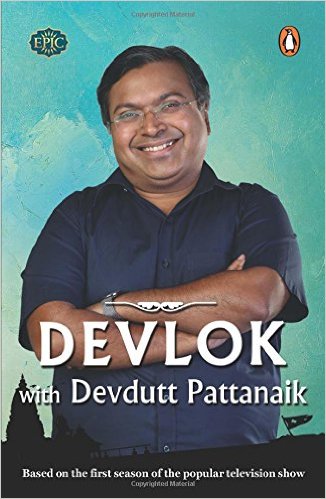 Devlok with Devdutt Pattanaik is based on the eponymous TV show with the same name. Devdutt Pattanaik has answered numerous questions on Indian Mythology that are commonly a matter of curiosity, especially among the youth. Alike the famous TV show, this book reviews the Hindu religion and its mythology from various perspectives of Philosophy, Ideology, and symbology.

What makes Devlok with Devdutt Pattanaik different from other mythological texts is the fact that it is penned in form of Questions and Answers. Just like these –

During the course of this book, the reader can find valuable insights on Hindu Gods & Goddesses. It surfaces the reasons towards Hindu rituals and beliefs and how they are relevant to the modern age. Moreover, Devlok with Devdutt Pattanaik narrates the contemporary interpretation of events that are said to be happened in Indian Mythology.

Those who like challenging myths and have a logical understanding of mythology are going to enjoy this book the most. Devdutt, with his experience, separates the truth from the myth in a way that is both logical as well as contemporary.

This book, Devlok with Devdutt Pattanaik, is an awe-inspiring guide to Indian Mythology even for those who know a lot about Hinduism.

About the Author: Devdutt Pattanaik

Devdutt Pattanaik is considered as a profound Indian Mythologist. He is known for his famous television show Devlok which aired on Epic. Devdutt has written a number of books on Indian Mythology which connects the modern world with their past. He has also spoken on Myths that Mystify and East versus West at TEDIndia 2009 .