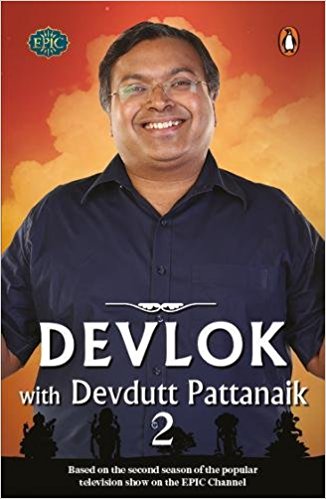 On the similar lines of the first book, Devlok Book 2 by Devdutt Pattanaik also answers some of the most interesting and fascinating questions about the Indian Mythology, Gods and Deities. During season 2 of Devlok with Devdutt Pattanaik, the most acclaimed mythological author requested readers to ask their questions on Indian mythology. Be it about the clans of Mahabharata, Surya Vansh and Chandra Vansh or the importance of holy things used Hindu rituals.

Devdutt Pattanaik has answered all sorts of questions about Indian mythology in his own style with amusing stories. With the second book of Devlok with Devdutt Pattanaik, be prepared to be educated and entertained at the same time as Devdutt gives you the best he had on Hindu culture.

In this second volume of Devlok with Devdutt Pattanaik, you will discover the difference between Dhyan and Darshan, Aastik and Naastik, Surya Vansh and Chandra Vansh. You will also learn about various Gods like Hanuman and the dark avatars of Lord Vishnu – Varaha and Narasimha. And, why goddess Lakshmi and Saraswati are always in conflict. Devlok with Devdutt Pattanaik Book 2 is an essential key for those who are looking to unlock the unknows of Hindu Mythology.

This is a pre-release review of Devlok with Devdutt Pattanaik Book 2 which will be updated after the release. The release date of the book is 24 Apr 2017.

About the Author: Devdutt Pattanaik

Devdutt Pattanaik is considered as a profound Indian Mythologist. He is known for his famous television show Devlok which aired on Epic. Devdutt has written a number of books on Indian Mythology which connects the modern world with their past. He has also spoken on Myths that Mystify and East versus West at TEDIndia 2009.