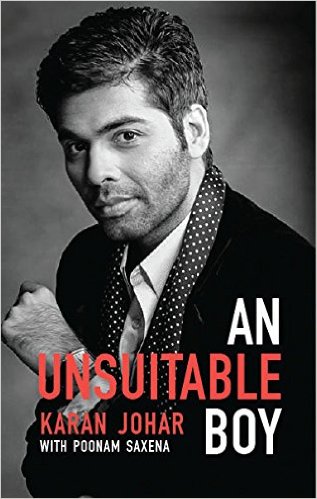 Karan Johar has been utterly jovial and open as a person as one would see him. But, there’s a lot more hidden behind the curtains of past. An Unsuitable Boy, his biography, unveils all that has been presumed and rumored about him. The book has a number of emotional moments from his childhood where he would cry from being bullied; his odd nature, the period of being an overweight; all the struggles he has been through. He mentioned how his parents played the most important support system. Karan Johar’s biography gives a clear and honest insight to his life and eventual growth of an incredibly talented personality.

His Bollywood journey has also been chronicled in his book, An Unsuitable Boy. From his debut film Kuch Kuch Hota Hai which became quite successful to his latest release as a director, Ae Dil Hai Mushkil, Karan has written lengths about his career.  An Unsuitable Boy by Karan Johar is going to change the perspectives of many.

Tearful at times yet inspiring read. Karan Johar at his best

Karan Johar’s directorial debut was Kuch Kuch Hota Hai which released in 1998 and fetched the Filmfare Award for the Best Director. He has worked as a director, producer, screenwriter, actor in numerous Bollywood films.

Poonam Saxena is a senior journalist of Hindustan Times and Editor of the weekly magazine, Brunch.  She also does a TV review show, Small Screen.