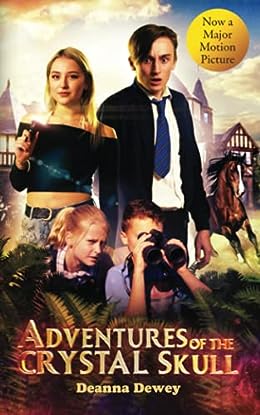 Adventures of the Crystal Skull is a fast-paced mystery novel written by Deanna Dewey. The scenes from the story could bring goosebumps to the readers and a cinematic visual happening in the head. Deanna published this book in June 2021 with TF Film productions Limited.

On display in its glass case, the crystal skull lies resting in a museum. Crowds of people walk past it each day. None realise the importance of this ancient artifact- or how it contains the power to change the world. From time to time, the skull feels a tiny inkling of energy. It can sense another skull out there.

If it is to save humanity its work is not yet done. It needs to bide its time and wait for the next chosen one to appear.

Book Review: Adventures of the Crystal Skull by Deanna Dewey 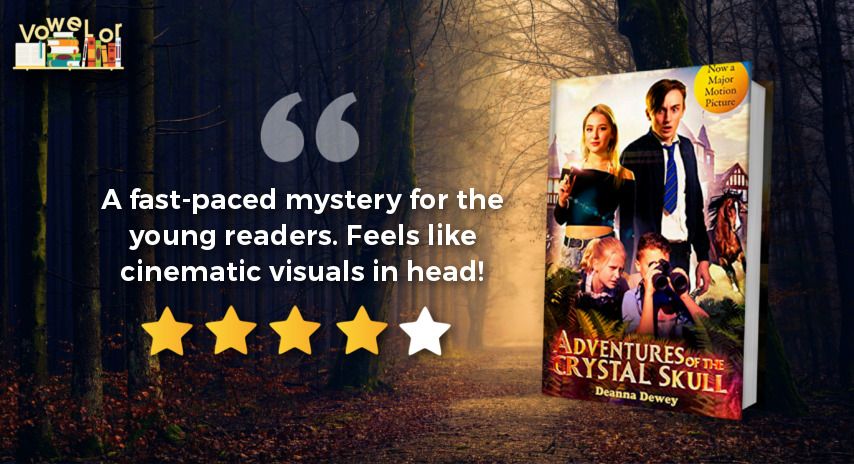 The story dwells around a cursed Crystal Skull that was brought by a group of travelers called the Signnyae tribe at the beginning of the civilization. In the later phase, with the help of archeologists, the human head-sized crystal skull was found and kept safely in a museum.

Until then, Scott, a 14-year-old teenager, found out while visiting the same museum with his schoolfellow. The incident that happened with Scott was not usual, his time had actually stopped at the moment and the museum clock was ticking backward.

He pulled out his phone to text his friend Mickie, but the screen started glowing blue and white. He came across Room 9 with a NO ENTRY signboard to search for his friends and suddenly a wind crossed the corridor. Within a second the signboard disappeared and the Room number 9 board glowed and the number changed itself to 6.

As he entered the dimly lit room, he could not see his teachers or friends but just a few artifacts placed haphazardly on open shelves.

He looked around and found a glass display case containing just one object partially covered by a cloth. He moved forward to take a close look at it, a light suddenly flickered in the case, floor trembled as if he had activated the skull.

Some grainy images flickered in the far wall, he could see his Gran, his grandmother, lifesize and lifelike, wearing her yellow leathers, wheeling her Harley Davidson out of her garage. She heard him but the image shuddered slightly.

As he tried to reach her she grabbed her chest and fell on the ground, Harley tipped over and trapped her beneath it. Scott cried, heartbroken, and tried to bring help, Gran, from the image, whispered to Scott “It’s too late.. You must make things right.. The curse.. The curse”.

As they returned home, the news came out shocking that Gran had actually passed away in the same manner as he saw in the visuals.

A newspaper advertisement appeared to Scott, wanting husband and wife to take care of an elderly woman and the large country house. The payment was fine and it was from the countryside. They all agreed to the offer and left the city. The owner of the house was Mr. Trelawney and his wife Beth, living with an elderly woman Mrs. Trelawney (his mother). Mr. Trelawney had strange looks towards Scott throughout the conversation about the place. He had a strange power of telepathy.

One evening while talking to Scott, Mr. Trelawney mentioned that he shares some kind of connection with Scott, brought by a curse from an ancient artifact. The skull was the reason behind their connection, a curse that only Scott can break.

Later, Mr. Trelawney helped Scott and his friends to steal the skull from the museum at night. So, they could chant and break the curse. When Scott’s parents discovered their son’s unusual behavior by asking the reason, Mr.Trelawney started narrating Scott’s connection with the skull and the curse.

He was talking about an incident that happened over 75 years ago. The night before he was getting deployed, Mr. Trelawney and Beth decided to get their palms read. There was Scott’s grandmother, then a little girl with curly hair, brown eyes standing around the table covered in red cloth.

Scott’s granny’s mother was their fortune teller, a gypsy, she saw Trelawney’s future, he was destined to die in the desert of ‘El- Alamein. She offered salvation, cloak protection, a magic spell that would keep them safe during the war. The gypsy revealed the human skull, she did some sort of spell or magic ritual before handing it over to Trelawney. The condition was to return the skull to her as soon as the war gets over so she could remove the skull, otherwise, consequences must be faced.

Scott’s parents got curious about their daughter and asked about her, to their surprise, it was the elderly woman residing with them. The curse made Trelawney and Beth immortal while their daughter was not bound by it. Scott carries the blood from his mother’s side and only he can remove the spell from the skull.

On a full moon night, at the altar, Scott started chanting the spell to break the curse on Mr. Trelawney and Beth, both standing next to Scott.

Later, old Mrs. Trelawney was given a happy family photo where her parents and little Trelawney were standing.

✅ Get your copy of Adventures of the Crystal Skull by Deanna Dewey on Amazon now!

Deanna Dewey did a great job with the words. The story moves at a fast pace. The characters used in the story are a mix of humor and mystery.

It’s a book for teenagers and the age group was kept in mind throughout the chapters. Teasing between siblings and fun among friends, a curiosity at the age, and hiding secrets from parents are all included in the book.

The chapters are kept short so a 9-15-year-old should not get bored reading the scenes.
Scott’s character is mischievous as well as having an urge to get his things done. In the first scene, he was shown teasing his sister and got scolded but later he was being trusted for his job, he was shown responsible enough.

The author had not focused much on the details of the surroundings instead she tried to keep it short focusing more on the important characters only.

The style of writing is what the young generation wants, interesting use of words, cinematic visuals in the head, and focusing much on the important characters which makes them more curious about what happens next.

About the Author: Deanna Dewey

Deanna Dewey is an author, a scriptwriter, and a successful film director from Hampshire. She lives by the countryside which was the inspiration for her debut book ‘Whispers in the Wind’ that she published in 2020.

Her stories are written for young readers typically between 5-15 years old and her writing style is absolutely perfect for this age group.

In 2021, Deanna’s second book ‘Adventures of the Crystal Skull’ came out. As a film director herself, she is adapting it into a family adventure film for the big screen. She also working on a series of books with the characters from the first book.