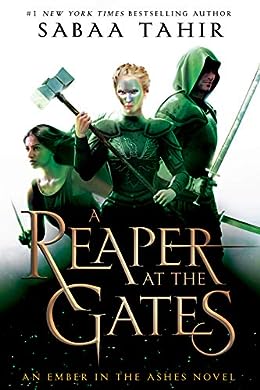 Book Review: A Reaper at The Gates by Sabaa Tahir

So, the latest novel in the Ember series gives a thrilling end to the story. A Reaper at The Gates is brilliantly weaved around the three main characters of the series – Laia, Elias and Helene.

Helene, the Blood Shrike of the empire, is assailed on all sides as Emperor Marcus becomes more unstable being haunted by his past. She has the sole responsibility to resist the approaching darkness and save her sister’s life along with the lives of everyone in the empire.

While in the far east, Laia knows the only way to change the fate of the world is to stop the Nightbringer at any cost. But that’s not going to be easy as the story of A Reaper at The Gates by Sabaa Tahir gets too intense. In the quest of bringing the Nightbringer down, Laia has to face a battle against the ones whom she never expected.

Elias Veturius, on the other hand, has become a Soul catcher giving up his freedom. His vows as a Soul catcher are powerful enough to ensure his devotion even at the cost of his humanity. With all unfortunate incidents and the death roaring at the edge of Empire, the threat of war looms ever larger.

Another great thing to know about Sabaa Tahir’s latest book, A Reaper at The Gates, is the cover of the novel. It features the three fierce-looking characters for the first time. Also, the previous novels in the Ember series are getting new themed covers!

Sabaa Tahir talks about her book A Reaper at The Gates

This is a pre-release review of the book A Reaper at The Gates by Sabaa Tahir and it will be updated as soon we get our hands on it. The release date of the book is 18 April 2018. Meanwhile, you can pre-order your copy on Amazon.

About the Author: Sabaa Tahir

Sabaa Tahir is an American YA Author having born in Pakistan. Before becoming a published, Sabaa worked as an editor at Washington Post. Her debut book, An Ember in the Ashes (2015) was featured in NY Times bestseller list.