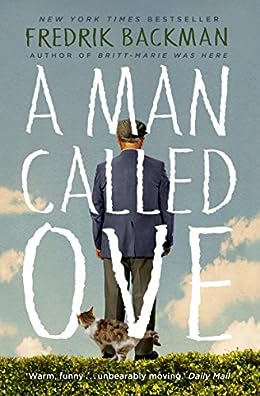 A Man Called Ove was published in the year 2012 by the Swedish blogger, writer, and columnist, Fredrick Backman.

The English version of the novel has no doubt, successfully made to the New York Times Best Seller List within 18 months after it was published and stayed on the list for 42 weeks.

Our Thoughts on A Man Called Ove by Fredrik Backman

The book unravels the story with such charm that you could not put this book down before reading the last chapter. It’s a long time since I have read something so heart-touching and moving. Its simple and convincing language will definitely make you laugh, cry and maybe annoy you sometimes.

The author continuously makes a transition between the past and present of Ove’s story. The further you will read, the more you will understand the reason behind Ove’s grumpiness and bitterness towards people and the love for his wife.

It is the perfect amalgamation of emotions like love, warmness, and sympathy. After reading this book, you will surely think of reading the other novels of the same author. And, that’s the unsaid achievement for any author.

The Storyline and Characters

This is a heartwarming story of a 59-year-old grumpy man named, Ove.

He is like any other human being on this planet but ironically, nowadays you couldn’t find many people like him. A man who has never taken a single step of his life without his principles. A man who still holds on to the old-fashioned clarity of belief and deed in the modern lifestyle.

Ove became orphan when he was 16 years old and since then he had trouble in showcasing emotions to the people.

He grew silent at a very young age and believed that “he was not a man who would talk about other men”. He was a man of actions rather than words.

Ove’s life was like a silent moving picture until the day, when he saw a girl named Sonja on the train.

“Ove has never been asked about how he lived before he met her. but, if anyone had asked him, he would have answered that he didn’t.”

Sonja and Ove started living in a terraced house and in his neighborhood he almost hated everyone. He managed to be friends with his first neighbor Rune and Anita but it never lasted for a long time. Ove didn’t remember how his thought conflicts with Rune started but could clearly see how it ended.

“He was a man of black and white. and she was color. all the color he had”

After Sonja died, Ove stopped living. That curmudgeon man had spent 40 years of his life with a single person who could handle his grumpiness and live with his principles peacefully. And now, he finds it difficult to surround himself with idiots who could not even ‘reverse a trailer’.

“It’s been six months since she died. But Ove still inspects the whole house twice a day to feel the radiators and check that she hasn’t sneakily turned up the heating.”

It was not easy for Ove to live with those stupid neighbors but every time he thinks of ending this nonsense, his principles get into the way. It all didn’t end the way Ove had planned, instead of, it ended in a way Sonja would have loved.

Why You Should Read ‘A Man Called Ove’

This book clearly states the fact that the man’s past never leaves him. His past experiences make him what he is today and what he might become tomorrow. Your every step in the present is based on what you have been through in your past.

The simple lessons in the book like, “If you can’t depend on someone being on time, you shouldn’t trust ‘em with anything more important either.” are worth reading and implementing in one’s life.

I don’t think there is any other simple way to make people understand the value of time.

The most I loved was the silent conversation between the Ove and the Cat. You would definitely smile at the way cat’s reaction is weaved in words. Though, Ove didn’t like the cat and never accepts that he is petting it. However, he had rescued him and made him his companion.

I would highly recommend you to read this one of the best novels, I have come across. It is a warm, funny and unbearably moving.

A perfect amalgamation of emotions like love, warmness, and sympathy.

This book was also adapted as a Swedish film, written and directed by Hannes Holm. The film was nominated for six awards at the 51st Guldbagge Awards in 2016 and it won in two categories. It was also nominated for the Best Foreign Language Film and Best Makeup and Hairstyling categories at the 89th Academy Awards.

Fredrik Backman was born on 2nd January 1981. He is a Swedish columnist, blogger, and writer. He has also written other books, My Grandmother Asked Me to Tell You She’s Sorry (2013), Britt-Marie Was Here (2014), Beartown (2017), and Us Against You (2018). They all are number one bestsellers in their native Sweden and have been translated into 25 other languages.

A Man Called Ove is the debut novel of the author. He was rejected by many publishers after he sent his manuscript of the novel. Four years later, “A Man Called Ove” has sold more than 2.8 million copies worldwide, making the book one of Sweden’s most popular literary exports since Stieg Larsson’s thriller “The Girl With the Dragon Tattoo.”

Dragons in the Clouds