While all book lovers are planning their favorite books to read these holidays, Bill Gates got some helping for all of them. The multi-millionaire businessman and philanthropist, Bill Gates, has put up a list of books on his official blog that one must read in 2016. And, guess what, I have got you the complete list of Five Bill Gates Favorite Books 2016. If you thought of picking up some good books, then you must include these 5 books recommended by Bill Gates himself. 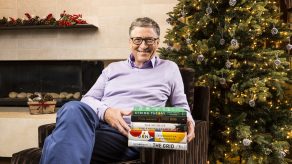 Don’t be confused with the name, It’s not a physics book explaining the Stress & strain. It’s a book about Tennis. Wallace’s has written five essays on tennis in a very simplest manner that it could hit even a person who has a dislike towards tennis. Bill Gates loves to play tennis, but in recent past, he kept himself away from the sport. So, he is reliving the passion again through the words of Wallace.

This is the second book that goes into the list of favorite books of Bill Gates. We all are aware of the brand “Nike”, this memoir is written by the co-founder of Nike. Bill gates Named his character as calm and silent. In this book, he defines the challenges and the regular strategies to work upon to take the brand to the next level. According to the Bill gates, he defines the path of success in a very beautiful manner.

#3. The Gene, by Siddhartha Mukherjee

This is the gift to the readers of Science and technology genre by Bill gates. You will find amazing definitions about how a doctor can be “Triple threat” to the Society. Moreover, Siddhartha Mukherjee counted himself in “quadruple threat” which is more interesting to the read. The reason why Bill gates include this book in his Five Favorite Books of 2016 is because he liked how Mukherjee defined the latest genome technologies to the layman person and it is commendable.

#4. The Myth of the Strong Leader by Archie Brown

This year’s fierce elections made Bill gates to opt this book for the must-read books by Bill Gates. Brown was a university scholar who has studied political leadership for more than 50 years. In this book, Brown shows that the leaders who make the biggest contribution to the history and humanity of the country are not the ones who perceived as the leaders. The change always starts from where the normal ends. Brown could not have predicted how resonant his book would become in 2016.

Bill gates can easily relate this book to the old profession days when he was having a job of writing software entity for a company that controls the power grid in the Northwest. If you have never given a thought about how the electricity reached to your house, then you should read this book. I think this book would convince you that the electrical grid is one of the greatest engineering wonders of the modern world. I think you would also come to see why modernizing the grid is so complex and so critical for building our clean-energy future.

That’s all from the list of  Bill Gates Favorite books 2016. But, Book lovers are getting a bunch of unexpected overwhelming surprises from other authors as well. Recently two huge announcements were made regarding the Veronica Roth’s new epilog and Paula Hawkins’ new book “Into the water”.

Excited Enough? Drop your comments below.